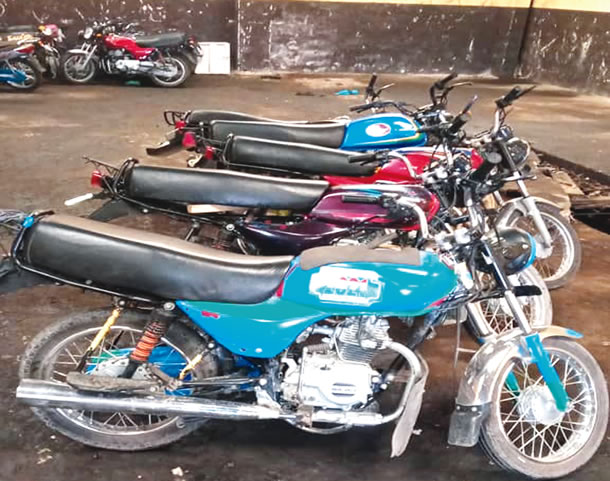 The Lagos State Police Command has said it impounded 70 motorcycles during a raid on motorcyclists plying restricted routes in the state.

No fewer than 19 suspected cultists were said to have also been arrested by men of the command during separate raids on the Somolu and Bariga areas of the state.

The state Police Public Relations Officer, CSP Muyiwa Adejobi, said the motorcycles were impounded during a clampdown on erring motorcyclists in the state, adding that the command deemed it necessary to embark on the enforcement to sanitise the affected areas.

“The command, at various locations within the state, including Apongbon, Lekki, Maroko, Obalande and Victoria Island, impounded more than 70 motorcycles, while efforts are being intensified to sustain the operation across other affected restriction areas like Eti-Osa, some parts of Ikeja, Island local government councils, highways, etc.”

In another development, the police spokesman said 19 suspected cultists were arrested on Thursday by the command’s special squad formed by the state Commissioner of Police, Hakeem Odumosu, to tackle insecurity and unrest occasioned by cult activities in the state.

“The CP has directed that the suspects be handed over to the command’s Strike Team, Ikeja, for proper investigation and possible prosecution,” he added. – Punch