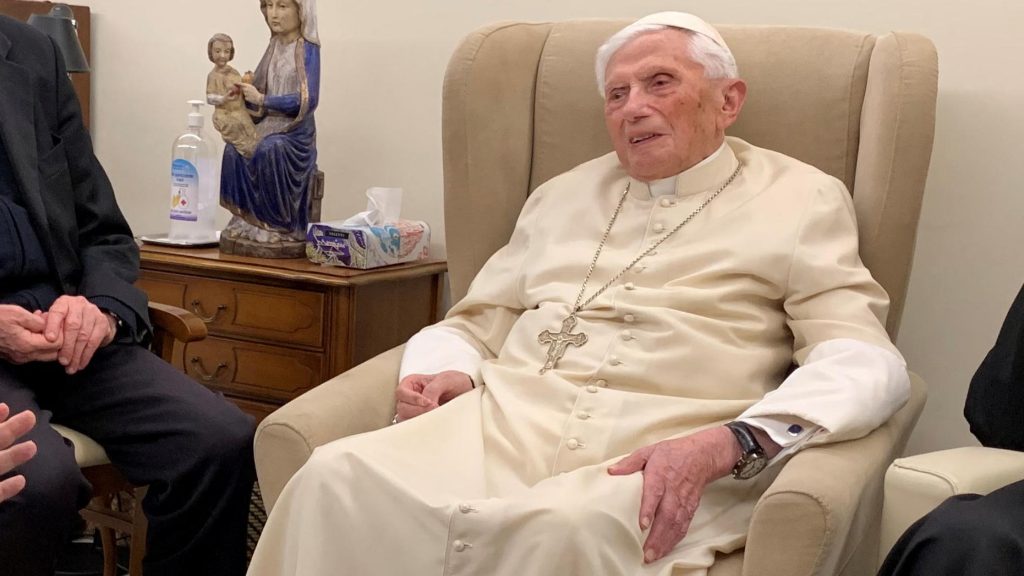 Pope Benedict, 95-year, who resigned from the post nine years ago, is “very sick” after a deterioration in his health on Wednesday, Francis confirmed.

“I want to ask you all for a special prayer for Pope Emeritus Benedict who sustains the Church in his silence. He is very sick,” Francis said during his general audience at the Vatican on Wednesday.

“We ask the Lord to console and sustain him in this witness of love for the Church to the very end.” according to CNN.

A Vatican spokesman later confirmed that “in the last few hours there has been a deterioration due to the advancement of (Benedict’s) age.”

“The situation at the moment remains under control and continually monitored by his doctors,” the spokesman, Matteo Bruni, said, adding that Francis visited his predecessor at the Mater Ecclesiae monastery in Vatican City after his general audience.

Archbishop Wilton Gregory of Washington, DC, asked Catholics and “folks of good will to pray for Benedict XVI,” in a Twitter post Wednesday.

“He served our Church in many roles – priest, scholar, diocesan bishop, curial official, & Pontiff. May Christ reward him for his loving service,” Gregory said of Benedict.

In 2013, Pope Benedict XVI shocked the world by making the almost unprecedented decision to resign from his position, citing “advanced age.”

Benedict’s announcement marked the first time a pope had stepped down in nearly 600 years. The last pope to resign before his death was Gregory XII, who in 1415 quit to end a civil war within the Catholic Church in which more than one man claimed to be pope.

In 2020, the Vatican said Benedict had suffered from a “painful but not serious condition,” following reports in German media that he was ill.

Two years earlier, in a rare public letter published in the Italian newspaper Corriere della Sera, Benedict wrote that “in the slow waning of my physical forces, inwardly I am on a pilgrimage toward Home.”

Benedict’s legacy has been clouded by recent scrutiny of his time as Archbishop of Munich and Freising, between 1977 and 1982, after a Church-commissioned report into abuse by Catholic clergy there was published in January.

The report found that he had been informed of four cases of sexual abuse involving minors – including two during his time in Munich – but failed to act, and that he had attended a meeting about an abusive priest.

Benedict later pushed back against those allegations, admitting he had attended the meeting but denying he intentionally concealed his presence.

In a statement shared with CNN, the Survivors Network of those Abused by Priests (SNAP) spoke of the “mixed feelings” the public may have of Benedict. “Sadly, many clergy abuse victims are not out of the woods in terms of healing from their wounds and getting the justice they deserve,” SNAP wrote.