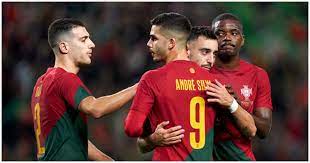 Portugal have defeated the Super Eagles of Nigeria in their first-ever meeting at the senior team level.

The Super Eagles lost 4-0 on Thursday at the 50,000-capacity Estadio Jose Alvalade in Lisbon.

The Portuguese was finally appointed the coach of the Super Eagles in May after they failed to qualify for the World Cup in Qatar.

Since assuming the position, Peseiro has struggled to rebuild the team which dashed the hopes of their supporters in Abuja.

During the face off with Portugal, a brilliant combination of Diogo Dalot and Bruno Fernandes extended Peseiro’s loss.

Fernandez open the score line just 9 minutes into the game, while Bright Osayi-Samuel of Nigeria conceded a penalty with a handball in the 18yard box.

Fernandes converted the penalty with a right-footed shot to make it 2-0.

Bright Osayi-Samuel was awarded a foul in the penalty area, but Emmanuel Denis lost the penalty after an argument with other players including Samuel Chukwueze over who to take the kick.

Portugal scored their third in the 82nd minute after Nigeria lost their chance.

Gonçalo Ramos’s right-footed shot from the centre of the box performed the magic for the Portuguese.

Portugal made it four two minutes later courtesy of João Mário shot from the centre box.

Portugal are in the Group H of the World Cup and will face Ghana, Uruguay and South Korea.