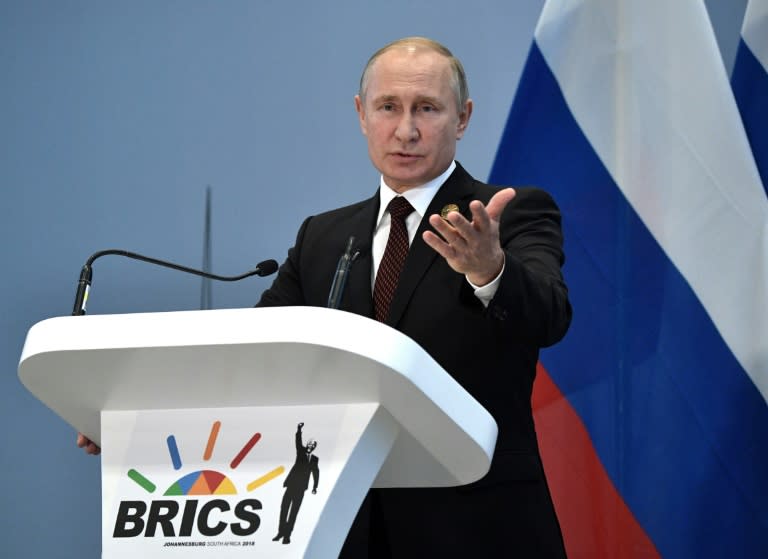 President Vladimir Putin is scheduled to host dozens of African leaders next week as Russia seeks to reassert its influence on the continent and beyond.

The heads of some 35 African countries are expected for the first Africa-Russia Summit in the Black Sea resort of Sochi next Wednesday and Thursday.

The summit is seen as an opportunity for Russia to revive Soviet-era relationships and build new alliances, bolstering Moscow’s global clout in the face of confrontation with the West.

“Russia has always been present in Africa, this is a very important continent,” Putin’s spokesman Dmitry Peskov said ahead of the summit.

“Russia has things to offer in terms of mutually beneficial cooperation to African countries.”

Though never a colonial power in Africa, Moscow was a crucial player on the continent in the Soviet era, backing independence movements and training a generation of African leaders.

Remnants of that influence remain, from the Kalashnikov rifle on the flag of Mozambique to the Angolan flag with its hammer-and-sickle-style gear and machete.

The leaders of former Soviet client states like Angola and Ethiopia will be at the forum, but so will others from where Moscow’s engagement has been traditionally low, like Nigeria and Ghana.

Egyptian President and African Union chairman Abdel Fattah al-Sisi — who Putin has fostered as an ally — will co-chair.

Russia’s ties with Africa declined with the collapse of the Soviet Union in 1991 and in recent years China has emerged as a key foreign power on the continent.

But Putin’s Kremlin — emboldened by its growing presence in the Middle East and the success of its military intervention in Syria — is trying to play catch-up.

Russian companies have invested in oil and gas in Egypt and Nigeria, in diamonds in Angola and in metals in Guinea and South Africa.

Moscow has also used a combination of arms exports, security expertise and support for local governments to deepen its political and economic presence.

“With varying degrees of success, Moscow is attempting to mobilise its Cold War-era connections and convert its old ideological links into business,” said Arnaud Dubien, the head of the Franco-Russian Observatory.

The Central African Republic — whose president Faustin-Archange Touadera will attend the summit — has been one of the most prominent examples.

Moscow has delivered weapons along with contractors to train soldiers in the former French colony.

It has flaunted its growing presence in the country, with Russian military contractors patrolling the streets of the capital Bangui and a Russian, Valery Zakharov, serving as security advisor to Touadera.

Moscow has struck a series of military agreements with other African countries and thousands of private Russian security contractors — many of them with experience fighting in eastern Ukraine and Syria — are reported to be working on the continent.

They include mercenaries from the Wagner Group believed to be controlled by Putin ally Evgeny Prigozhin.

In Libya, Russian contractors are reported to be fighting on the side of military commander Khalifa Haftar and in Mozambique they helped the government fight jihadists.

Russian fighters have also been spotted in Sudan and Madagascar.

Still, analysts say it’s too soon to be speaking of a major Russian presence across the continent.

“There is a real difference between the masterfully promoted narrative and the reality,” French geopolitical analyst Arnaud Kalika said.

In a research paper for the French Institute of International Relations, Kalika said Russia’s return to Africa was more modest than Moscow would want the world to believe.