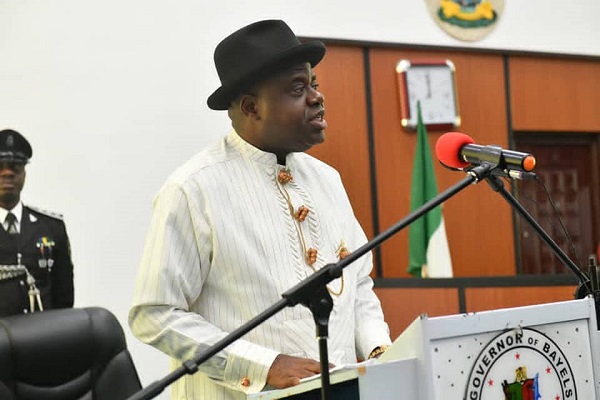 Gov. Douye Diri of Bayelsa has assured both serving and retired judges of the state Judiciary of his commitment to their welfare.

The governor, who was represented by his deputy, Lawrence Ewhrudjakpo gave the assurance on Friday at a special valedictory court session in honour of Justice Lucky Boufini at the Chief Judge’s Court, Ovom in Yenagoa.

Diri said his administration had already taken the initiative to build befitting residences for top judicial officers at a more secure and suitable location within the Yenagoa metropolis.

He eulogised Justice Boufini as an erudite and incorruptible judge, who meritoriously served the judiciary in old Rivers and Bayelsa states, in various capacities.

According to Diri, the retired Judge creditably discharged his responsibilities as a Magistrate, Chief Registrar and bowed out as a High Court Judge in the state.

He, however, lamented that the exit of Justice Boufini from service, on account of retirement, had created a huge vacuum, which would be difficult to fill in the short term.

Responding to a demand for more judges to be appointed in the state to strengthen the bench by the state Judiciary, the governor said that the appointment of judges was not the exclusive preserve of the government because it was subject to approval by the National Judicial Council.

Diri assured members of the Bench and the Bar that government would look into issues bordering on office accommodation and welfare package for retired judicial officers.

“As a matter of fact, the place you saw and described as the Judges’ quarters was initially considered but clearly that place will no longer be used for that purpose.

“We have agreed on what to do for our respected judges after consultations with My Lord, the Honourable Chief Judge; so we are working on that.

“I can assure you that this prosperous government is conscious of the welfare of Judges, while serving and even upon retirement, because there is no need protecting a man while he is serving and then expose him to untold hardship upon retirement.

“I agree with you on the improvement of the retirement benefits of our Judges.

“We are looking at the issues holistically with regards to the office spaces and we have agreed to work on the office issues and handle them,” he said.

Earlier in her remarks, Justice Kate Abiri, the Chief Judge of Bayelsa, said the special session was organised as part of activities to honour Justice Boufini’s 37 fruitful years of service.

Justice Abiri remarked that Boufini, who served as the first Chief Registrar of Bayelsa, laid the solid foundation upon which the state’s judiciary was built, and called on government to provide better welfare packages for retiring judges.

The Attorney-General and Commissioner for Justice, Mr Biriyai Dambo (SAN), described retired Justice Lucky Boufini as a wonderful and industrious judge who distinguished himself on the bench.

Dambo, who spoke through a Director in the Department of Public Prosecutions of the state judiciary, Mr Alaowei Opokuma, said the retirement was glorious as it coincided with his birthday on June 12.

the Chairman of the Nigerian Bar Association (NBA), Yenagoa Branch, Mr Ukumbiriowei Saiyou, said Justice Boufini was an incorruptible judge that laboured tirelessly with others to build the state judiciary to its present status.

While praising the state government for granting financial autonomy to the state judiciary, Saiyou appealed for complete independence to enable the judicial arm of government to discharge its duties dispassionately.

A one-time Commissioner for Local Government and Senior Lawyer, Chief Fedude Zimughan, pointed out that most of the serving judges in the state were aging very fast because of their heavy workload.

He, therefore, called on government to improve on the working conditions of magistrates and judges, as well as take the issue of recruiting more judicial officers seriously, to ensure effective and efficient administration of justice in Bayelsa. (NAN)