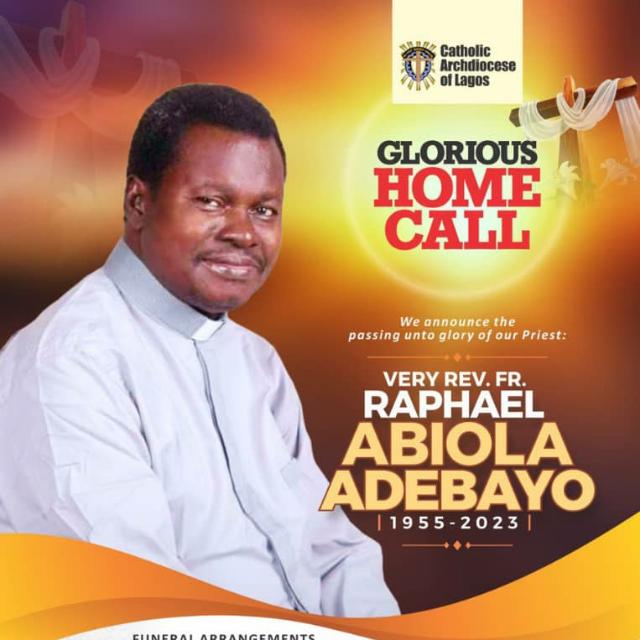 Rev. Fr. Raphael Abiola Adebayo who died last week – on Tuesday 3rd January 2023 – was buried at the Ikoyi Cemetery in Lagos today. His interment followed a funeral Mass attended by scores of priests, religious and lay people from across Nigeria and outside and presided over by the Catholic Archbishop of Lagos, His Grace Alfred Adewale Martins at Holy Cross Cathedral.

The funeral events began yesterday afternoon with a Requiem Mass at Catholic Church of the Resurrection, Magodo, from where the body was moved to the Marian Shrine in Maryland where Rosary Prayers were conducted, with the Emeritus Archbishop of Lagos, Anthony Cardinal Okogie and other priests in attendance. This was followed by Office of the Dead and Vigil Mass with Archbishop Martins presiding at St. Agnes Catholic Church, Maryland. Masses and other prayers ran through the night before the body was conveyed this morning to Lagos Resource Centre Chapel in Victoria Island for another Mass of the Dead. All this was done for a man whose life affected many

Frankly, if it was possible to add another middle name to Fr. Raphael Adebayo’s name, that name would have been ‘Charity’ because he demonstrated that virtue all through his life as a father, brother, priest and friend to all, in his pursuit of soldiering for God and devotion to the Blessed Virgin Mary.

I was his last Parish Pastoral Council, PPC Vice-Chairman in St. Agnes Catholic Church, Maryland Lagos where he was parish Priest, before he was transferred in December 2013 to Catholic Church of the Resurrection, Magodo and I learnt quite a lot from him, especially his belief in the power of the Eucharist, devotion to Our Lady, philanthropy and caring for old people. His Rosary devotion was legendary, day and night to the Marian Shrine. I am sure Our Lady will intercede for him for all he did for her children while on earth.

Fr. Adebayo was with us in St. Agnes Maryland for over 18 years, haven been posted there in 1995 as parish priest. I didn’t fully start worshipping in Maryland until almost two years later but in the time he was parish priest, a lot happened in Maryland. From just one church community in 1995, several parishes were born – Sacred Heart Catholic Church, Ojota; Our Lady Queen of Apostles Catholic Church, Ilupeju; Our Lady Queen of Peace Catholic Church, Ifako-Gbagada; Catholic Church of the Presentation, Ikeja GRA; and St. Raphael the Archangel Catholic Chuech, Anthony Village. Of course there was also the new Rev. Father’s house and the imposing Parish Social Centre on which he worked and practically became an architect, engineer, builder, quantity surveyor, etc.

He had started his Pastoral work as a Priest as the assistant to the Administrator of the Holy Cross Cathedral, Lagos in 1980, after his ordination on the 12th of April that year and was then posted as the Parish Priest of St. Patrick’s Idumagbo. He left St. Patrick’s for further studies in 1983. On his return, he was posted to the Catholic Church of the Assumption, Falomo as the Parish Priest in September 1984 until April, 1989. Thereafter, he was posted to St. Paul’s Ebute-Metta till 1992 and from there to St. Anthony’s Gbaja, Surulere until 1995 when he moved to St. Agnes Maryland as parish priest. On the 17th of December, 2013, he was transferred to the Catholic Church of the Resurrection, Magodo, the parish he was, until his passage on Tuesday 3rd January 2023.

Fr. Adebayo was generous to a fault; charitable/loving to a fault; trusting and patient to a fault. Apart from his weekly charitable sessions with the poor, the blind, lame, orphans, widows and widowers which culminated in the setting up of the Saint Agnes Care & Support Centre, he paid rent, hospital bills, school fees and salaries to parishioners and anyone who approached him for assistance and could be verified able to do something in the parish. Sacred Heart Catholic Hospital Abeokuta was the regular station he sent parishioners and others who needed medical assistance. He even mobilised and took the mentally unstable who strayed to and lived around the parish to LASUTH when bed space was available.

He was a specialist in taking care of old people. Very Rev. Msgr. Joseph Adeolu Adeniyi who lived up to 89 years, followed Fr. Adebayo from one parish to another until he died on November 9, 2011 when they were both at St. Agnes. Very Rev. Msgr. Patrick Somide, who also stayed with Fr. Adebayo in Maryland, moved with him to Magodo until his death on Thursday 13th July, 2017 at the ripe age of 97 years. There were other elderly priests who were comforted by his caring accommodation. Unfortunately he did not get too old to be cared for by others in old age hilself, although there is no doubt that many people cared for him during his illness of the past several years, even before he left Maryland.

Fr. Raphael was a workaholic and refused to slow down, even when he had his first stroke. He would hold meetings after morning Mass. He would celebrate several private Masses for people. He would do Communion rounds to places as far away from Maryland as Victoria Island and Obalende. I had to rearrange my schedules to go with him on those Sunday Communion rounds because he just would not stop! But I gained a lot from those rounds and got to know why late Msgr. Pedro Martins would respond to only Fr. Raphael even when he refused to respond to others who had come earlier to give him Communion. We shared such memorable Rosary times together on those trips and his belief that the Communion he administered would always work wonders was very impactful to me.

When his elder brother, Rev. Fr. (Col.) Michael Adebayo (Rtd.) died on Tuesday 14th July, 2020, some of us who were anxious told Fr. Raphael that he had better buckle up because Mama is still alive and he must not succumb to anything at this time. But even at this time, we are sure that our ‘Mama of Two Fadas’ who is still very much kicking, will remain strong to bear this loss.

I recall that there was pomp and circumstance at Magodo on Sunday, April 18, 2021, when Fr. Raphael marked 41 years of Priesthood, combined belatedly with his 66th birthday. That day also saw the launch of a book, titled, “Some Visitations of Our Lady Around The World”, compiled by him. That was his second book, the first being, “Witnessing to The God of Silence”, published earlier to mark his 35th Priestly Ordination Anniversary and 60th birthday in 2015.

Rev. Fr. Raphael Abiola Adebayo was born on the feast day of St. Patrick – 17th of March, 1955 in Ilara, Ogun State, Nigeria. He had his elementary education in St. Michael’s and St. Martins Primary Schools, Mushin and St. Thomas Aquinas, Surulere. The secondary school was in St. Theresa’s Minor Seminary, Ibadan while his tertiary was in Saints Peter & Paul Major Seminary, Ibadan, at the end of which he was ordained a Priest in 1980. He went for further studies in Mass Communication at the University of Leicester, United Kingdom between 1983 and 1984.

I stopped being his PPC Vice-Chairman in 2013 but several years after, his only name for me was ‘VC’.

We shared some great spiritual learning times together and his coordination of the Archdiocesan Novenas at the Marian Shine in Maryland encouraged many people to come visiting Mother Mary in her home in Maryland. As he recounted in an interview I had with him in 2010 to mark 25 years anniversary of the Marian Shrine: “The primary objective is not people coming to search for something and they get it and they are fulfilled. No. it’s far more than that. It’s a case of the love of Our Lady that attracts them because even when you do not expect, and you receive, it’s a plus. And to that extent I think that it’s supposed to be more of gratitude for what they have received. So a good number of times, we discover that when people even come with intentions, they are not disappointed. They go back fulfilled. And in some cases when the intentions are not directly given as expected, they still have this peace of mind that keeps them going; more of the reality on ground at the Shrine. Nobody comes there and goes away empty-handed”.

Yes, indeed! We pray that Fr. Raphael Abiola Adebayo – Soldier of God; Commander of Mary’s Army, will also not go empty handed. He never got tired shepherding God’s flock and we pray that the Almighty will reward him with eternal life and the Blessed Virgin Mary will intercede for him for his preparation prayers and good works so that the gate of heaven will be open to him. May our prayers here on earth go with him and may the angels lead him to the feet of the Most High God. Amen.