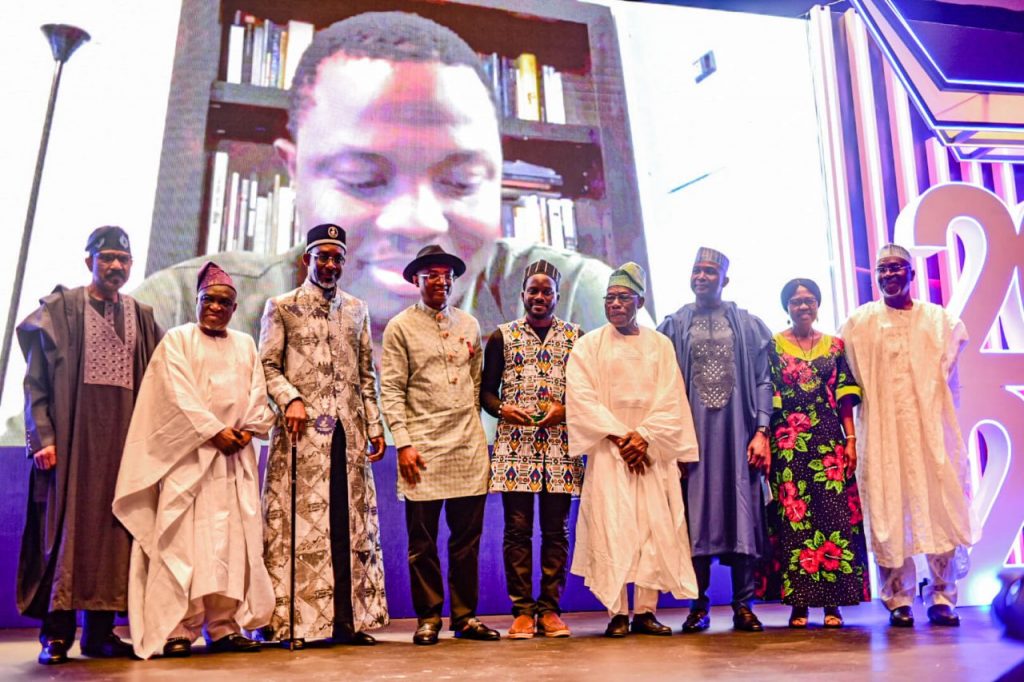 The Advisory Board for The Nigeria Prize for Literature, sponsored by Nigeria LNG Limited, today announced Nomad, authored by the poet, Romeo Oriogun, as the winner of the $100,000 prize for the 2022 cycle on Poetry.

Professor Akachi Adimora-Ezeigbo, Chairperson of the Advisory Board, made the announcement at the Grand Award Night ceremony in Lagos, themed “Touching the Stars”. She also announced Dr. Sakiru Adebayo as the 2022 winner of the Nigeria Prize for Literary Criticism, which comes with One Million Naira (N1,000,000) prize money.

Four winners of The Nigeria Prize for Science were also jointly awarded the prize money of $100,000. Muhydideen Oyekunle and Shehu Ado, as well as Sesan Peter Ayodeji and Emmanuel Olatunji Olatomilola, won the prize for their respective works titled, Gains in Grain Yield of Released Maize (Zea Mays L.) Cultivars under Drought and Well-Watered Conditions, and Development of Process Plant for Plantain Flour.

The winners were awarded after the former president, Chief Olusegun Obasanjo (GCFR), in the keynote address stressed the critical roles science and literature play in national development. Chief Obasanjo said Nigeria could reach greatness through a strong will to change the prevailing narrative, adding “Nigeria is, as we all know, blessed beyond measure in talents, capabilities, and resources.”

“The world has always been fast spinning into areas of scientific breakthroughs and innovations that aim to maintain high standards of living, while sustainably preserving the earth for generations yet unborn. But now, more than ever, there is a sweeping tide of energy transition and climate change mandates, medical advancements and applications, food security interventions to combat hunger, as well as measures to sustain life on earth.

“Who is truly listening, and willing? Reaching and indeed, touching the stars which are light years away, is in retrospect, very much possible. In fact, there are several Nigerian citizens that occupy positions of merit, as global patriots. A national meteoritic rise can happen within the blink of an eye. Just like a space launch, a scientific breakthrough can shoot our nation to those seemingly unattainable heights where we can touch the stars.

“We can adopt world-class best practices, and leap with giant strides into the future. We can collaborate on exchanges of ideas and invest in research and development. We can focus on the education and mental development of our people so that we position the nation in the direction it should go.

“I speak to the political class, the administrators, business institutions and organisations, small and medium scale enterprises, the creatives and content developers, leaders across all spheres of influence, the man or woman whose heart burns with passion for Nigeria’s good, and to the boy or girl, who is discovering his or her talents and gifts. May we all rise to that place of willingness and do so, collectively,” he said.

In his welcome remarks, NLNG’s Managing Director and Chief Executive Officer, Dr. Philip Mshelbila, said the Company sponsored the prizes to ensure that excellence takes a prominent position in creativity and innovation in the country.

Speaking on the 2022 theme of the science prize, Innovations in Sustainable Food Security, Dr. Mshelbila stated that the prize and the winners were a wake-up call for the country and Nigerians to take responsibility for food sustenance.

“From the mangroves of the Niger Delta, through the rain forests, to the grassy plains and savannah terrains, the nation pitifully boasts of poverty, yet it is bountifully endowed with arable lands and agricultural treasures. Including its aquatic wealth. This is a wake-up call! We must take responsibility for food sustenance, at the very least, and scale up to foreign exchange revenue drive from food/agriculture export once our people are assured of their daily meals. What’s more, we must shun wastages, arising from poor handling or preservation of agricultural produce,” he said.

On literature, he stated that leading publishing experts indicate that poetry submissions have been unprecedented the world over. He stated further that the entries for the 2022 Nigeria Prize for Literature were the most ever in the history of the prize.

He said NLNG, as a world-class company, was actively seeking its place in the future, adding it is focused on gaining strength within the energy transition landscape.

“It really is the future of the world, and one for which NLNG should be rightly positioned, to bring Nigeria into that realm,” he stated.

The winning book beat two other books on the Shortlist of Three, the Call of Water by Su’eddie Vershima  Agema and Your Crib, My Qibla bySaddiq Dzukogi to clinch the prize. The book competed against 287 books submitted for the competition in 2022.

According to the judges, the winning book, Nomad, stands out as the most technically accomplished, rendering the topical subject of migration in a language laced with lyrical figurations. They stated that “the 67 poems in the collection were held together by a travel motif, marshalled in each poem with equal intensity, and linked to the African past, including the Middle Passage, and the African future.”

The panel of judges include Sule Emmanuel Egya, who is the Chairman of the panel and a professor of African Literature and Cultural Studies at Ibrahim Badamasi Babangida University, Lapai, Niger State. Other judges are Toyin Adewale-Gabriel and Dike Chukwumerije. Adewale-Gabriel is a poet and fiction writer. Dike Chukwumerije is a spoken word and performance poet, and an award-winning author. Professor Susan Nalugwa Kiguli was the International Consultant for this year’s Prize.  She is a Ugandan poet and an associate professor of literature at Makerere University.