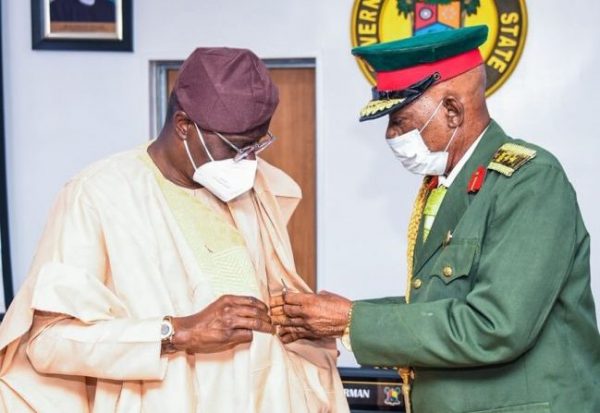 Sanwo-Olu, who also donated N50million to the State chapter of the Nigerian Legion expressed his administration’s commitment to empower widows of the fallen heroes.

He, therefore, directed the Ministry of Women Affairs and Poverty Alleviation (WAPA) to work with the office of the Lagos State Chapter of the Nigerian Legion to identify persons the State can give empowerment and supports to within the first quarter of this year.

“Every year, we set out to remember our fallen heroes, men and women that served the country, especially on the war front. Those that paid the supreme price while serving the nation and it is customary that on January 15, we remember them. But before then, we usually have an emblem launch which we use to remind ourselves that we are together with them in fellowship and we are together throughout this period to offer prayers, wish them the very best and offer some succour, especially to the families of the fallen heroes; the widows and the widowers.

“On behalf of the Government and people of Lagos State, we would donate the sum of N50million for the emblem. So you can see that we have done 10 fold of what we did the other time. That itself is a big lift for us. We will continue to support in other areas.

“We gave commitments around empowering some of the widows. I am using this opportunity to direct the Ministry of Women Affairs and Poverty Alleviation (WAPA) to work with your office to identify beneficiaries and people that we can give empowerment and support to and that would be done within the first quarter of this year.

He urged the people and government to continue to support and identify with widows, children and families of the fallen heroes by donating generously, buying and wearing the Armed Forces Remembrance Day celebration emblem.

Governor Sanwo-Olu, alongside his deputy, Dr. Obafemi Hamzat, some cabinet members and heads of security agencies in the State were decorated with the Armed Forces Remembrance Day emblem.