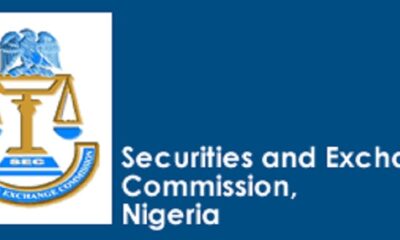 The Senate has expressed confidence in the leadership of the Securities and Exchange Commission, SEC, which it said has exceptionally restructured the Commission and returning it to profitability.

However, the Senate urged the management to introduce more measures to further deepen the capital market in a bid to attract more local investors especially young Nigerians.

Senator Adeola while commending the Management of the Commission for their efforts so far in turning around the fortunes of the SEC, however stated the need for more efforts in a bid to make the capital market more attractive to Nigerians.

According to him, “You have done well, I must commend you. I commend you for your efforts in repositioning that agency from a point of deficit after paying salaries to a point of profit now and to the extent of contributing to the coffers of government, I commend you.

“But going forward, there is still a lot to be done at the SEC and I believe that you will try your best. So many people are not interested in the Nigerian capital market again, it is losing steam. Even though other world economies market no one is patronising them because it is not the best of times, but I want you to see ways by which you can encourage local investors to our capital market.

“That is one area you should spread your tentacles to, let the young people know that if they put money in the market in the shortest possible time they can access their profit. You have done well, but there is always room for improvement. It is that improvement we are trying to emphasise on now and we think you are getting it right now; we hope God will guide you in your quest to turn around the fortunes of the SEC”.

Speaking earlier, the Director General of SEC Mr. Lamido Yuguda told the senators that the Commission is 100% self-funded agency of government and pays dues to the Consolidated Revenue Fund of the Federal government under the Finance Act 2020 that has amended the Fiscal Responsibility Act of 2007.

He said, “Right now we are contributing 25% to the federal government which is deducted at source and we are also asked to pay another 15% at the end of the financial year when we submit our annual accounts. That is making 40% in total, I am saying that based on what we have done so far, that 40% is a little too heavy for the Commission and I would like this Committee to look at this issue.

While admitting that the Commission has recorded major turnaround in its fortunes, Yuguda however stated that 40% contribution to CRF might be too high for the SEC and urged the Senators to take a second look.

“We have been able to cope with the 25% since it started, but the additional 15% has actually been very difficult for us. We are coming from a deficit position, when the bill for the 15% came, the Commission had already spent the balance of the 75% that we were able to retain on pour overheads.

“The Commission is doing a lot to attract more Nigerians to the market and we have achieved a lot in that regard. We know the capital market can do a lot to assist the government in its current efforts to reposition its finances and the economy,

Yuguda who stated that the Commission has been operating under very difficult circumstances since it is currently superintending over a market that was affected by the negative impact of the coronavirus pandemic, however assured that steps are being taken to ensure that the fortunes of the SEC continues to improve.

He disclosed that the Commission raises revenue from the market to finance its regulatory activities on the market, but however cautioned that if these fees are raised too high, they will deter mobilisation of capital and deter participation in the capital market saying that there needs to be a good balance between asking SEC to raise revenues to finance its activities and asking SEC to also contribute revenue to the coffers of government.

He said, “If we go through the Medium-Term Expenditure Framework which we started last year, if we look at 2022 and 2023, you will see that we have worked on our expenditure and have done a lot of financial management to turn around the fortunes of the Commission. We therefore need the support of all to engineer the kind of transition we are thinking of at the SEC.”