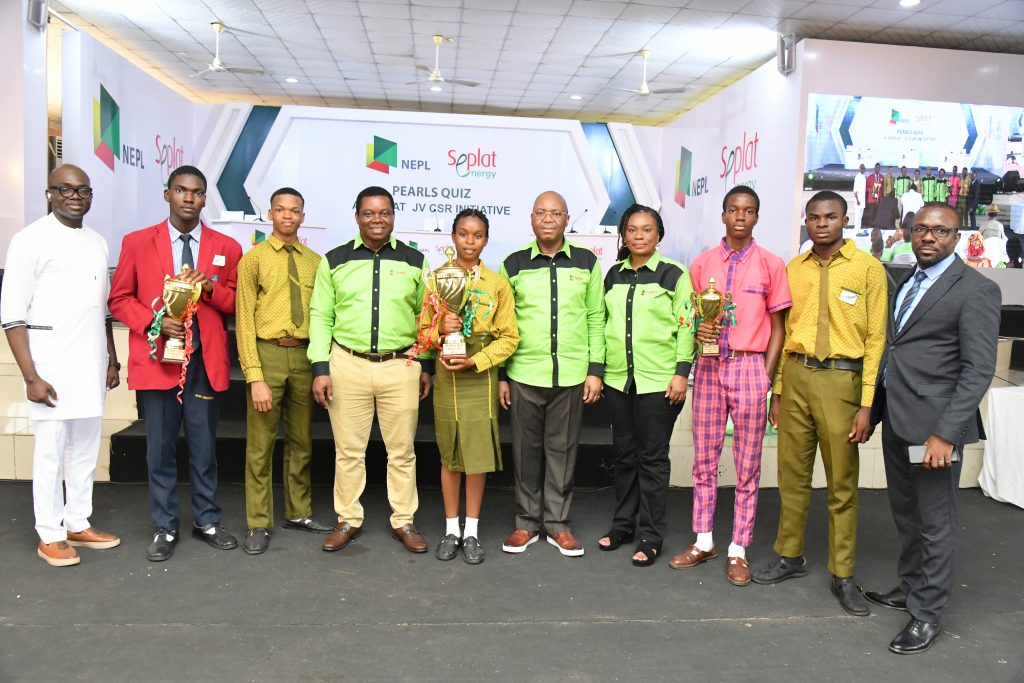 Seplat Energy Plc, has concluded the 11th edition of Seplat JV PEARLs Quiz, which is one of its signature educational Corporate Social Responsibility initiatives.

Green Park Academy Edo State emerged winner from among 130 participating schools and bagged the coveted prize of Ten Million Naira (N10m) for a project and one hundred-thousand-naira (N100,000) scholarship for each of its three partaking students.

The grand finale of the programme, which was held in Benin City, Edo State, had in attendance secondary schools from Edo and Delta States, government officials, traditional rulers, various communities from both States, media, management of the NNPC Exploration and Production Limited (NEPL), staff, management and board members of Seplat Energy, among others.

Deeper Life High School, Warri, Delta State; and The University of Benin Demonstration Secondary School emerged the second and third place winners respectively. A total of N18.675m was awarded to the three winning schools and their participating students.

The Seplat JV PEARLs Quiz is a key component of Seplat Energy’s Corporate Social Responsibility (CSR) initiatives, the competition is executed in conjunction with its Joint Venture partner, the NNPC Exploration and Production Limited (NEPL). The quiz competition was keenly contested, and all qualified schools and teachers were rewarded with consolation prizes.

In her opening remarks, the Director, External Affairs and Sustainability, Seplat Energy, Dr. Chioma Nwachuku, who was represented by the company’s Base Manager, Western Asset, Mr. Emmanuel Otokhine, described the initiative as an annual competition open for all secondary schools in Delta and Edo states with the main objective of improving academic performance in both states which are Seplat host states. She stated that the programme also aims to rekindle the spirit of academic excellence and healthy competition amongst schools and the youth population by motivating, encouraging and rewarding the scholarship spirit, while also inculcating the benefits of teamwork. PEARLs quiz stands for Promoting Exceptional and Respectable Leaders.

In the same vein, the Chief Operating Officer, Seplat Energy, Mr. Samson Ezugworie, reiterated that the competition is aimed at promoting academic excellence and competitiveness, stating that Seplat Energy has taken it as a task to help to improve education in the places where it operates. He thanked the competing students and their teachers, while congratulating all the students who had made it to the semi and final stages of the competition.

Speaking on the impact of the initiative, the Seplat Energy COO explained that the PEARLs Quiz has come a long way, as on the part of the student, the initiative had touched the lives of 51,955 students in Edo and Delta state and over 50 of them are in various universities across the country of which some have graduated, four have benefited from the undergraduate scholarship scheme, some have undergone industrial training with Seplat Energy; and these students provide a pool for the future employment. While it impacts on schools in form of project-based cash prize, the programme has assisted the winning schools to develop legacy projects in the school such as language laboratories, computer laboratories, libraries school buses, classroom blocks and various structural projects in the schools.

Ezugworie added that the PEARLs Quiz has helped Delta and Edo states to maintain very high pass rates in external examinations such as WAEC whilst assuring Seplat Energy’s commitment in doing more into the future.

Similarly, the Managing Director, Western Asset, Ayodele Olatunde in his welcome remarks, stated that the competition is an annual competition open to Delta and Edo secondary school students with the aim of encouraging the spirit of academic excellence, healthy competition and motivate those who are hardworking. He added that the programme is an avenue of building the future and giving back to the societies, which have given the company the requisite support to operate.

Olatunde thanked the Edo and Delta state governments for giving Seplat Energy an enabling environment to operate; and parents and teachers for their efforts on the education of their wards and students. He encouraged students to apply the knowledge they have acquired so as to keep achieving more.

All qualified schools from the test stage go home with Seplat branded laptop bags, exercise books and T-shirts. The qualification test is done online with Seplat providing data for all entrants. This year, 682 schools took the test and 130 schools progressed to the next round.

Commending the company for its commitment to education and national development, the commissioner for Education Edo state, Dr Joan Oviawe, on behalf of Edo state government appreciated Seplat Energy and its CSR team. She said Seplat Energy’s educational projects were in line with the state government’s vision for education, while stating that the Seplat Teachers Empowerment Programme (STEP) remains a big feat.

She also lauded Seplat Energy for allowing the wining schools to do whatever project they wished with the money and encouraged student to keep striving in education, noting that “education is not a scam.”

Also speaking, Delta State Governor, Ifeanyi Okowa, who was represented by the State Permanent Secretary, Ministry of Education, Augustine Oghoro commended Seplat Energy, stating that the initiative will surely encourage students to take their studies seriously while mentioning that the exercise has also brought students from Edo and Delta States to square up in a friendly atmosphere. ‘’Undoubtedly, they will all mix and chart new friendship, know themselves better and deepen the bond of unity and love among people from the two states.”

He also appealed to other corporate bodies to identify with the communities where they operate. ‘’There should be increased conscious efforts to impact positively on the lives of the people. Government cannot do it alone, therefore partnership with the private sector is essential to ensure that sustainable development permeates every sector of our national life,” he added

Basking in the euphoria of victory, the representative of the victorious school revealed that the initiative has given them the avenue to showcase their talents and thanked Seplat Energy for the rare opportunity.