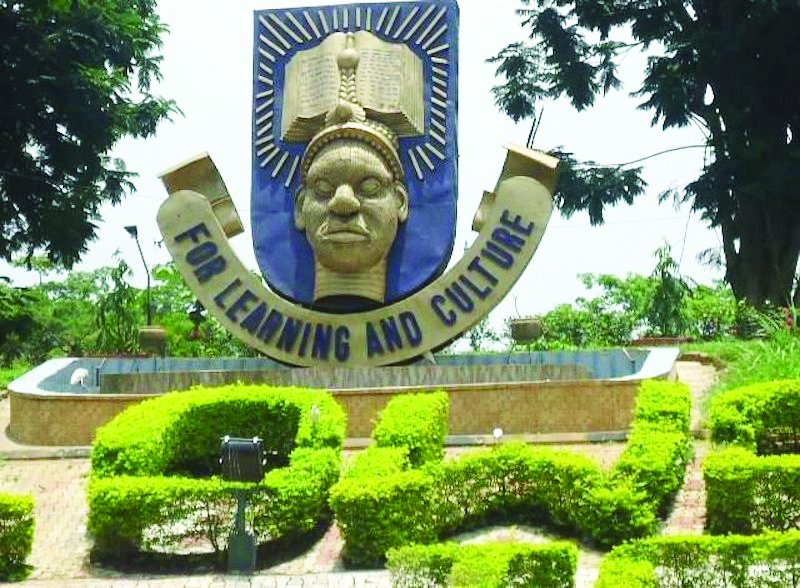 The Obafemi Awolowo University (OAU), Osun State, is witnessing a disquiet over the decision of the institution’s Senate to uphold the recommendations of an investigative committee that gave a soft landing to a lecturer indicted for sexually harassing a student.

According to an exclusive report on Monday by The Nigeria Xpress, in 2018, the university had received an audio recording from Miss Rachel Momoh, a student of the university, alleging that a senior lecturer, Dr Adebayo Mosobalaje of the Department of English Language solicited sexual favours from her.
A Joint Committee of the Council and Senate, headed by Professor Felix Madubuike, was subsequently set up after preliminary investigations and at the end of its deliberations, the Committee found Mosobalaje culpable of the offence and decided that his action was ‘deserving of the highest punishment of dismissal’.
Curiously, however, the Committee avoided recommending Mosobalaje’s dismissal, giving him what appeared as a slap on the wrist.
The Committee’s report, which was seen by The Nigerian Xpress, said the lecturer should be given an official warning, lose two years of promotion; be paid half salaries for the duration of his suspension; and not hold any position of authority in the university for five years.
The report has been upheld by the university’s Senate, awaiting the Governing Council’s final decision next month.
The Nigerian Xpress investigation showed that the university got into a dilemma over the Mosobalaje case after a high-ranking traditional ruler and other influential personalities in Osun State intervened on the lecturer’s behalf.
It was learnt that Mosobalaje had initially dragged the university to court seeking to quash the report of the panel set up by the university to investigate the allegation against him.
While the case was in court, the university could not take further action against the lecturer until he withdrew the case.
The Nigerian Xpress gathered that withdrawal of the court case was a condition given by the traditional ruler and others before they could intercede on behalf of the lecturer.
The allegation against Dr Mosobalaje as contained in the Joint Committee’s report said an academic staff in the Department of English in which Miss Rachael Momoh with registration number – EGL/2013/216 – was a student at the time, related with her in a manner inconsistent with his duty as an academic staff.
“Your conduct is in breach of Paragraph 1 (ii) of the Code of Conduct for the University Community which states that “an academic staff shall not relate to his student in a way that could compromise or be seen to have compromised his position as a teacher, examiner and guardian.”
Dr Mosobalaje denied culpability when the Committee sought his response to the allegation.
Mosobalaje’s trouble began when the Vice-Chancellor, Prof Eyitope Ogunbodede received through an internal memo dated July 5, 2018, a written report of ‘sexual harassment bordering on unsolicited, unwelcome and subtle sexual overtures recorded in an audio device’, against the lecturer.
Upon the receipt of the memo, the university registrar in a letter dated July 23, 2018, asked Dr Mosobalaje to respond to the allegation.
In a letter dated July 24, Dr Mosobalaje admitted to the audio recording conversation but denied harassing or intimidating the student in any form.
The vice-chancellor directed that an investigative panel be set up to look into the allegation in compliance with the Code of Conduct of the university community.
During the Joint Committee’s cross-examination, it was argued that the complaint of Miss Momoh of sexual harassment against Dr Mosobalaje was not put in writing at any time by the complainant to the vice-chancellor as provided for by the Code of Conduct.
Also, the Code of Conduct did not state categorically that a lecturer cannot date a student and that there was no place in the audio recording that showed that Dr Mosobalaje harassed Miss Momoh.
However, in a re-examination, some of the issues were trashed, notably that the university regulations did not state that a complainant must personally put down the complaint in writing and that a complaint could be made verbally to an officer who would then reduce it into writing.MOSOBALAJE’S DEFENCE
Dr Mosobalaje’s counsel, Mr Olufemi Akintomiwa, told the Committee that there was no letter of complaint from Miss Momoh as required by the Code of Conduct, before the Investigative Panel, was set up by the vice-chancellor.
He also argued that the Investigative Panel did not accord Dr Mosobalaje a fair hearing as he was not allowed to hear the evidence of the complainant and witnesses, neither was he allowed to cross-examine them.
“The Investigating Panel just brought in people to interact with. It was not a case of Miss Momoh bringing witnesses to back up her complaint.
“The interaction of Dr Mosobalaje with Miss Momoh as captured by the audio recording, could not be said to be sexual harassment,” the counsel said.
He also argued that Miss Momoh herself admitted that her grades and the class of degree she graduated with were what she deserved and not as a result of sexual harassment.
“There was actually ‘no case’ before the Joint Committee of Council and Senate. The Counsel asked the Committee to allow itself to be an unbiased arbiter in the proceedings as the University was both the complainant and the judge in the matter,” he stressed.
Related Posts

THE COMMITTEE’S DECISION
The Committee found Dr Mosobalaje culpable and said he was deserving of the highest punishment of dismissal.
However, in a twist of events the Committee made recommendations perceived see as a slap on the wrist of the lecturer.
Not a few members of the academic community of the university felt dissatisfied with the Committee’s recommendations.
Some of the university’s lecturers who responded to The Nigerian Xpress’s question on the matter argued on the condition of anonymity that, if upheld by the Governing Council, the report was, capable of setting a bad precedent and would be unfair to others who were punished for similar offences in the past.
A lecturer said the Committee’s report was illogical. “How could they have in one breath said they found him culpable and deserving of the highest punishment of dismissal and in another breath recommended lesser punishments”.
Another lecturer said to save the institution from dishonour, the Governing Council should take a dispassionate look at the matter.
Reacting to the issue in a telephone chat with The Nigerian Xpress, the Public Relations Officer of the university, Mr Abiodun Olarewaju, said that the recommendations of the panel were not sacrosanct because they would be subjected to review by the university’s Governing Council.
“Let me make something clear. The recommendations of the panel are not sacrosanct. They must pass through the Senate of the university and the Governing Council, which is the highest ruling body. So, whatever the panel says and whatever decisions reached by the Senate are subjected to the scrutiny of the members of the Governing Council.
“The panel submitted to the Senate and Senate critically looked into the submission of the panel, reviewed it critically and now will make their recommendation to the Council. So, whatever Council says, in this case, is final,” he said.
In the infamous sex-for-marks scandal at the same university in 2018, Accounting professor, Richard Akindele was fired after an investigation into allegations of sexual misconduct found him guilty.
The Vice-Chancellor, Prof Ogunbodede said in a statement that it had confirmed the voice on the tape soliciting his student Monica Osagie for sex was Akindele’s.
Akindele had “acted in a manner that… compromised his position as a teacher and examiner… his conversations with Miss Osagie were about examination scores and inducement of favour for the alteration of examination scores,” the university said.
The vice-chancellor added that Akindele’s request for sex in exchange for marks was a “scandalous behaviour that has brought ridicule to the name of the university” and it portrayed the institution as a place where “teachers and examiners trade marks for sexual favours.”
He added that the university had decided the professor should be dismissed from the services of the university for gross misconduct.
But Olarewaju, the university PRO said the two cases were not the same because Akindele admitted to making sexual overtures towards Osagie and did not get the services of a lawyer.
“Let me correct a misconception here. The two cases in question are not similar. While Professor Akindele admitted, Mosobalaje did not admit  and got the service of a lawyer,” Olarewaju said . –   The Nigerian Xpress