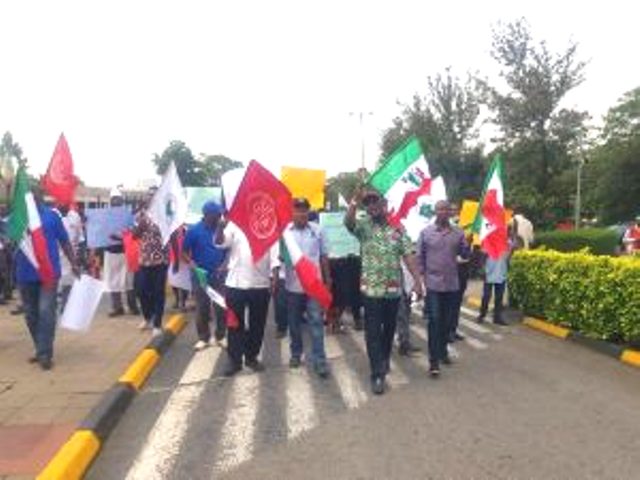 After staging peaceful protest by the employees of Abuja Sheraton Hotel, the management of the company has commenced payment of entitlements to the workers.

The payment followed an agreement reached by the employees under the umbrella of National Union of Hotel & Personal Service Workers (NUHPSW) and Marriot (managers of the hotel) after an emergency meeting in Abuja.

Recall that the workers had staged a protest over the non-payment of their severance packages, carrying placards with various inscriptions such as: Marriott Pay Us What Is Due To Us; Marriott Stop Manipulating The Workers; Enough Of Exposure To Safety Hazards; Marriott Treat Us Like Human Being; We Are Not Animals among others.

The workers numbering over 291 of different cadre are expected to make clearance and be paid accordingly.

Some of the affected workers confirmed that severance pay has commenced and the payment is expected to be made to all staff either casual or permanent staff. Payment continues today (Wednesday) for all cleared employees casual or not.

Besides, the meeting agreed that Capital Hotel Plc would add Christmas bonus for the workers, in assumption that they have worked all year-round.

“All staff not minding casual or not will get the benefit. This bonus does not need any clearance as all will get from tomorrow (Wednesday)”.

General Secretary of National Union of Hotel & Personal Service Workers (NUHPSW), Comrade Leke Success led the workers in the struggle among others.

The hotel union members protested against Marriott for the non-payment of their severance packages as agreed with Marriott and for other issues bordering on safety standards as a result of the degraded state of the hotel.

It is understood that the appalling state of the hotel had given reason for the safety complaints, which the union had asserted as posing danger to the employees, the hotel guests, and the general public. This explains why the new owners have decided to temporarily shut down its operations to enable them carry out renovations of the hotel.

The new owners had communicated its decision to temporarily shut down the hotel to Marriott since September, a sufficient time frame that allows them to make all necessary preparations for the shut down.

This development is coming in the wake of the acquisition of majority stake in Capital Hotel plc, owners of Abuja Sheraton hotel, by 22 Hospitality Limited, a sister company of NIPCO Plc.

The company earlier had issued a statement through its spokesman, Alhaji Lawal Taofeek, who quoted the Group Executive Director of the company, Alhaji Aminu Abdulkadir, as saying that the new investors are desirous of restoring the hotel to its former glory of being the first-choice luxury hotel in Abuja.

According to Aminu, this strategic drive is also aimed at making the hotel carve out a niche for itself by becoming a leading hospitality firm offering premium services to customers in accordance with global standards.

The statement added that the new investors are keen to turn around the fortunes of the hotel through the injection of substantial new capital under certain preconditions.