SON Discovers Substandard Tyres In A Warehouse In Ogun State 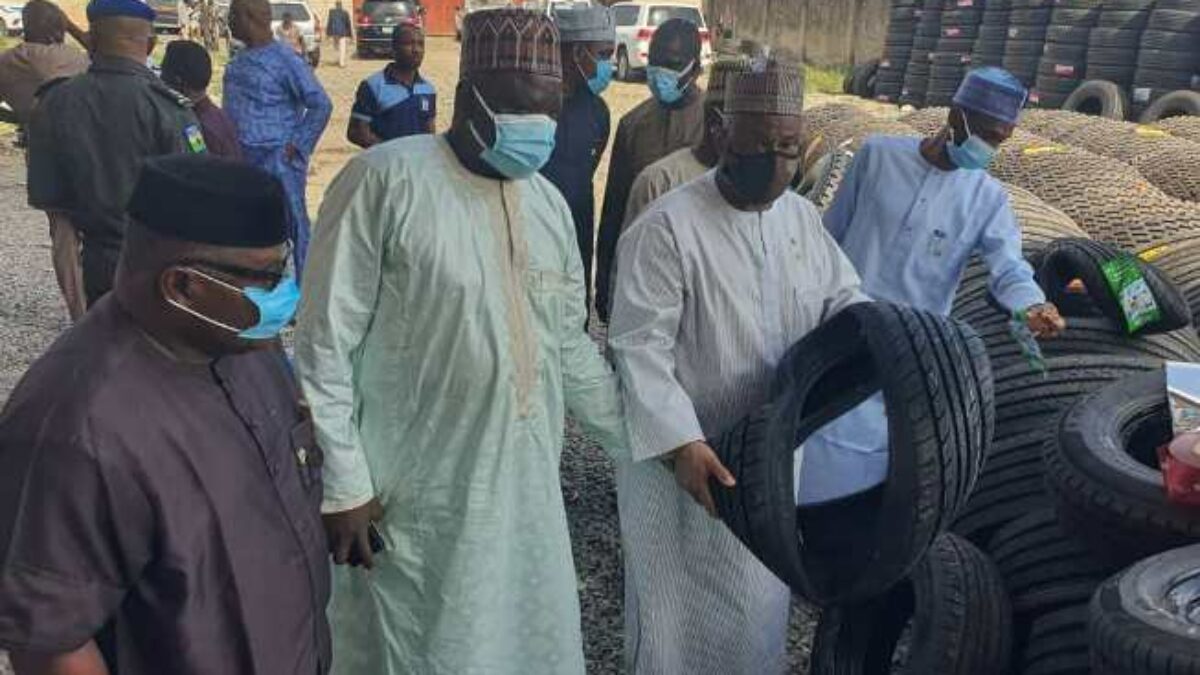 The Standards Organisation of Nigeria (SON), has stormed a warehouse in a remote location in Ogun State where substandard tyres were stacked and probably sold to motorists.

The types were successfully confiscated in a determined tempo to rid the country of such products.

The agency had recently found that recalcitrant dealers of fake products are devising new methods by taking advantage of the vast nature of the country to warehouse substandard goods in remote areas.

The Director General, SON, Mallam Farouk Salim, who was represented by Mike Dakhing, Director, Inspectorate and Compliance, of SON said the evacuation exercise of the seized stuffed-in tyre of 200 containers in Obafemi Owode Local Government, Ogun State was to ensure that the tyres do not find their ways into the nation’s market, stressing that products have been tested and they all failed the critical parameters as a result of stuffing.

“You may recall that few weeks ago, the Director General, Mallam Farouk blew open to the whole world the nefarious activities going on in this community and as you know he opposes fake and substandard products and any unwholesome activity that will encourage it because that is the mandate he has been given.

Today we are here to evacuate these tyres which is the first stage in their destruction. It will interest you that we obtained the laboratory results after testing these tyres which they all failed. In our warehouse, we will await the necessary legal procedures that will enable us to destroy them.” he said.

He said the evacuation and destruction would cost the agency much money, adding that the agency has been perfecting an act that would ensure the substandard products importer bear the cost

Reacting to a question on why these tyres are classified as substandard, he stated that the act of stuffing them into have rendered the tyres dead on arrival into the country.

“The act of stuffing them into one another and instead of bringing in the tyres into different containers, the purveyors of these tyres stuff into one another. For example, if they are to bring 300 tyres in one container, they will now have the opportunity to bring in 1500 tyres and in doing that, this compromises the quality of the tyres and as you know the tyres are made of wires and carbon and the test reviewed that the textile strength of the tyres have been compromised so they are no more fit for use and this is why we are going to destroy them. They may look nice in the eyes, but we rely on scientific investigation and analysis.” Salim stated.

He assured that the agency would prosecute the unscrupulous importers of these tyres, stating that SON has a law that specify the right type of punishments to be melted on dealers of fake and substandard products in the country.

According to the DG, We have a law that specifies what punishment would melt to purveyors of this kind of illicit trade and we would go by that law, so after destroying these tyres, we will subject these unscrupulous importers to the provisions of the law.

He called on Nigerians to always support the agency by giving relevant information should they suspect any form of dubious activity in their locality, maintaining that SON cannot be everywhere to checkmate the preponderance of these products with no economic value.

“I will like to appreciate the tip off to this place, because we got this through intelligence reports. We crave for the indulgence of Nigerians and implore them to help us identify not only tyres, but all products that are dangerous to human lives and the environment. We are calling on Nigerians to let us have any information because in line with our mantra which is “see something, say something”, the truth is that we cannot be everywhere if Nigerians do not help us we will not be able to address this issue headon,” he stressed.

He pointed out the need to increase its sensitization activities across the country as Nigerians who still purchase substandard products because they are cheap, needs to be warned about the negative effects of these products, saying that as a standards body, it would invest more in sensitizing the populace to desist from the purchase of substandard goods.

“We are in a dilemma and just like any other regulatory agency, when a consumer in his own decision goes to buy something that is substandard and fails to report,  this is why we organize sensitization programmes and stakeholder engagement to warn Nigerians about the effects of substandard products, because a lot of lives have been saved in the process of buying standard products particularly tyres, electric cables and cylinders. We are not at every point of entry so we can only rely on information that people give us and in doing that we also need to sensitize the public on the harmful effects of these substandard goods to their health and others. This is the only thing we can rely on for now,’’ the DG added.

Oyo State Is Using Data To Ensure Even Development- Makinde