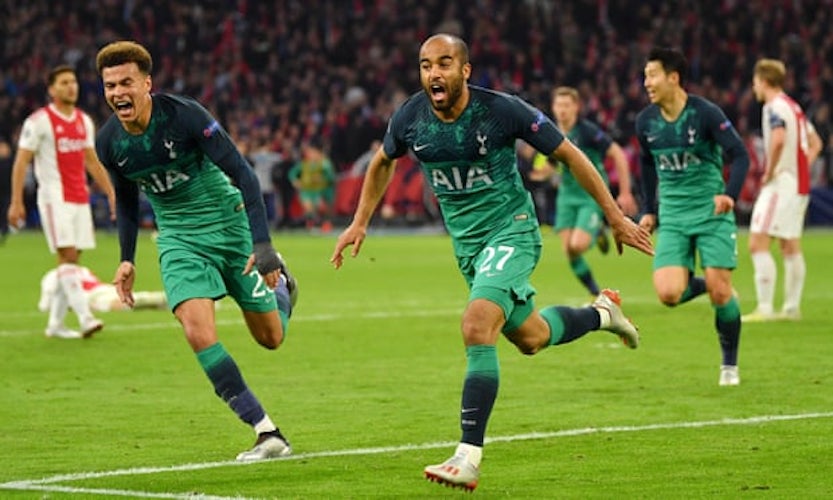 For Tottenham Hotspur, it was shaping up to be a night of so many what-ifs. What if Jan Vertonghen’s late header had gone in rather than thudding off the crossbar? What if they had started better? And, though it feels slightly unfair to put this on the losing players, what perhaps if Harry Kane had been fit, rather than watching the game in a coat, when his team needed one more goal to make this a dream of a comeback?

But then the clock ticked into the 95th minute and the ball was suddenly on Lucas Moura’s left foot. It was their last chance. He had to score and when the ball left his foot there were suddenly eight Ajax players stretched out on the pitch, not believing what they could see.

Moura had already scored twice for Spurs in that period and those goals, in the 55th and 59th minutes, changed the complexion of the evening completely. It was a brilliantly gutsy recovery and a feat of escapology to make your bones vibrate, following on from Liverpool’s destruction of Barcelona the previous night. And, incredibly, it will be Spurs who face Liverpool at the Wanda Metropolitano in Madrid on 1 June, having come back from 2-0 down on the night and 3-0 on aggregate.

At this level, teams cannot usually expect to get away with defending so generously. Spurs played with drive and energy and all the other qualities that we usually come to expect of Pochettino’s teams. What they lacked sometimes was control and, at the back, they were vulnerable too many times.

The first goal was the case in point. Matthijs de Ligt is a gleaming talent at the heart of the Ajax defence, so assured and deceptively worldly that it is difficult to believe he will not turn 20 until late-summer. Nobody made more of effort than the teenager to make sure they were first to Lasse Schone’s corner. Yet he was allowed to do so because Kieran Trippier committed the set-play sin of not tracking his man. De Ligt had started his run from the edge of the penalty area and his momentum meant he could get higher than Dele Alli as they jumped for the ball. The corner, the header, the goal. For all Ajax’s elegant touches, Spurs had been ambushed by the oldest set-play routine in the book.

With only four minutes gone, it was a reminder why Spurs have managed the rather baffling achievement this season of losing over a third of their Premier League matches while, for the most part, being the only side capable of giving Manchester City and Liverpool a run for their money. It was too easy for De Ligt and scoring so early had the added effect of soothing the home crowd. Not that Ajax’s most boisterous supporters, known in these parts as the F-Side, gave the impression they could be easily silenced in any circumstances, standing bare-chested behind their drums and their flags and wondering, presumably, whether the series of strategically place red banners beneath the roof of the stadium, showing all the club’s trophies in order, year by year, might be getting a new addition.

Spurs had to improve and, at 1-0, they started to ask some questions of their own. Alli, operating in a No 10 role, found lots of space. Spurs had Son Heung-Min back from suspension and that gave the team even more energy in attack, especially taking into account the speed and directness of Lucas Moura.

All the time, however, Spurs looked susceptible. David Neres had been injured during the warm-up, meaning a shift in personnel for Ajax that saw Dusan Tadic take over on the left, Kasper Dolberg promoted from the bench to lead the attack and Hakim Ziyech switching to the right. Tadic, in particular, was a dangerous opponent and Trippier had a hard time restraining him, in keeping with what has been a difficult season for one of the heroes of England’s World Cup adventures.

Was Trippier fouled in the build-up to Ajax’s second goal? He certainly believed so and it was true that a lot of referees would have agreed he had taken a bang in the face from a high boot. Ajax, however, did not wait to find out the rights and wrongs of it. Tadic played the pass to Ziyech and it was a powerfully struck left-footed finish to send the ball past Hugo Lloris into the far corner.

Pochettino brought on Fernando Llorente to replace Victor Wanyama for the second half. Spurs had to gamble and, for the first time, they started to pin back their opponents. Ajax were sitting on their 3-0 lead but it was a mistake to abandon their previous sense of adventure. It encouraged Spurs to pour forward. Alli put in a brilliant performance and when the chances fell to Moura he took them in the manner of someone who was utterly determined nobody would end the night complaining that Harry Kane’s absence was the key factor.

The first one originated with Alli bursting through the middle. Moura was following his colleague and when the ball came his way he took it in his stride, still running at full pelt, before driving it into the bottom corner with his left foot.

Moura’s next goal was even better, pouncing on the loose ball, eluding a couple of couple of challenges and somehow finding a gap in which to fire the ball through a heavily congested six-yard area. Moments earlier, Llorente really ought to have buried Trippier’s low cross. Moura’s quick instincts after the ball spun off Andre Onana, Ajax’s goalkeeper, spared his team-mate.

About 11 Billion Barrels Oil Reserve Yet Untapped In Nigeria