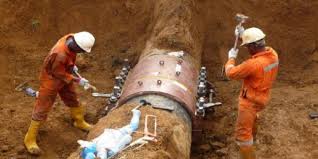 The action came just hours after President Muhammadu Buhari held talks with leaders from the oil-producing Niger Delta aimed at halting the sabotage.

BC News reports that the attack caused a massive spill, flooding a creek knee-deep in crude, quoting a Batan community leader Dickson Ogugu..

No group claimed responsibility, and there was no immediate comment from the government.

But a militant group called the Niger Delta Green Land Justice Mandate threatened last week to blow up the pipeline to show its displeasure that the region is represented at the peace talks by “those associated with the causes of a long history of neglect and impoverishment.”

Buhari’s first meeting with Niger Delta community and civil society leaders on the issue ended inconclusively, with the president saying he would weigh their concerns alongside an upcoming report from security agencies and “revisit the situation” at an unspecified date.

Among other things, local leaders want the government to give oil blocks to states in southern oil-producing areas.

The militants and government had agreed to a truce that neither has honored. Nigeria’s military continues punishing raids that often target entire communities, civil society groups say.

The Trans Forcados pipeline was bombed in July and only resumed operations two days ago, defying militant warnings that no repairs be carried out on attacked installations. The pipeline carries crude and gas to the 400,000-barrel-a-day Forcados export terminal owned by Dutch-British multinational Shell.

That brief resumption allowed the oil ministry to announce Tuesday that production had increased to 2.1 million barrels a day.

That’s the highest since attacks began in February that at one point reduced production by a million barrels a day, throwing Africa’s biggest economy into recession.

The multinationals operate joint ventures in which Nigeria’s government is a majority shareholder.

The federal government peace talk with Niger Delta leaders with the intention to bring peace to the region ended without a agreement by both sides, thus raising fears of more militancy, civil society leaders said.

The militants responsible for most of the attacks, the Niger Delta Avengers, were not represented and dissociated themselves from Niger Delta representatives they called corrupt.

Representatives of the southern oil-producing region wanted the government “to commit to some credible process of dialogue,” said Ledum Mitee, secretary of the Niger Delta Forum.

Instead, Buhari said he would consider what they said, align that with a report expected from security agencies and then make an “appropriate response,” Mitee said.

A statement from the president’s office said he would consider the reports and then “we will revisit the situation to ensure that we succeed this time,” AFP reports.

The president insisted that Niger Delta leaders had more to do than anyone else to bring peace, given the “influence they have on militant groups.” That ignored the Avengers’ condemnation of those leaders.

The two sides had agreed to a truce that neither was honoured.
Nigeria’s military continues punishing with raids that Mitee said often target entire communities. The Avengers on Oct. 20 blew up a subsea pipeline, declaring they had crippled exports from U.S. Chevron’s Escravos terminal. Two other terminals that were attacked have not exported for months.

The president last month claimed the militants are “sponsored by economic looters” — referring to allegations they are backed by politicians in the mainly Christian south, home to former President Goodluck Jonathan, who voted against Buhari, a northern Muslim, in 2015 elections.

Attacks this year have cut up to a million barrels a day from the usual 2.2-million-barrel production, throwing Africa’s biggest economy into recession.

The Avengers are demanding that oil multinationals leave the region, noting decades of careless production has destroyed fishing grounds and agricultural fields and brought nothing but misery to residents.