Street Sweepers In Lagos To Get Pay Rise 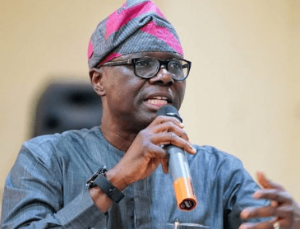 Lagos State Governor, Mr. Babajide Sanwo-Olu has promised to increase the salary and allowances, as well as welfare package of the staff of the Lagos State Waste Managers, particularly the street sweepers in recognition of their dedication to a clean and healthy environment in the State.

The Governor said his administration remains committed to the welfare of the waste managers and those ensuring a cleaner city and secure environment.

He implored the electorate, particularly PSP operators and waste managers in Lagos to vote massively for Tinubu, himself, and other APC candidates for various positions.

“Vote for all APC candidates from top to bottom. We have about one month to the election; go and inform all your neighbours and all those you pack their waste and work for that this is where you earn your income and feed yourselves, they should not make you lose your source of livelihood.

Sanwo-Olu gave the assurance at a mega rally organised by the Association of Waste Managers of Nigeria (AWAMN) popularly known as PSPs at Mobolaji Johnson Arena, Onikan on Thursday, to drum up support for the re-election bid of the Lagos State Governor as well as the election of the presidential candidate of the All Progressives Congress (APC), Asiwaju Bola Tinubu in the 2023 elections.

During the rally, thousands of waste managers in Lagos and South-West states endorsed the presidential ambition of Asiwaju Bola Tinubu and the re-election of Governor Sanwo-Olu, promising to mobilise for their victories in the forthcoming general elections.

He said: “Tinubu is the brainchild of LAWMA in Lagos, which many states in Nigeria have replicated. I want to assure you that the election of Tinubu at the federal level will raise the bar of more commitment to the environment and economic growth through the sector.”

The Governor also urged all Nigerians, particularly Lagos residents to vote massively for all APC candidates throughout the country to galvanise development across levels.

“Tinubu knows the way, we should get our PVCs and mobilise others to get their PVCs to vote for Tinubu and Sanwo-Olu. Let them know that it is Tinubu we are voting for. When he gets to Abuja, he will perform.

“Many states in Nigeria now have KAI, LAWMA and LASTMA. Tinubu is our teacher. On March 11, we should come out and vote for Sanwo-Olu,” he said.

In his address, the Managing Director and Chief Executive Officer of the Lagos State Waste Management Authority (LAWMA), Mr. Ibrahim Odunmboni, said the association will mobilise its personnel in thousands for APC’s victory in the 2023 general elections.

He said Governor Sanwo-Olu had strengthened the workforce of LAWMA to over 38,000, noting that everybody is working collaboratively to keep Lagos State clean.

“I want to urge everybody to go out, pick up your PVCs if you have not done so, and ensure that you vote for a change, generation unborn and environment,” Odumboni advised.

Odumboni noted that while the mobilisations were encouraging, the association must equally translate the massive support to electoral victory on election day, saying this was the only way to truly appreciate and help actualise the worthy ambitions of Tinubu and Sanwo-Olu.

He also urged people to go and collect their PVCs for them to be able to vote during the elections. “The opportunity is still open for those who are yet to collect their PVCs. Ensure you collect yours, to ensure victory for our leader, our governor, and other APC aspirants.”

“Vote for him to become president. Collect your PVCs, tell others to go and collect their PVCs so that we can vote for Tinubu and Sanwo-Olu,” he said.

Speaking on behalf of the waste managers, the National President of (AWAMN), Mr. David Oriyomi, vowed to mobilise all their members for the door-to-door campaign, to reach every nook and cranny of Lagos State for Tinubu and Sanwo-Olu.

He recalled that AWAMN was the first organisation that endorsed the candidacy of Sanwo-Olu in 2018, saying that the association was pleased that he has “proven us right by the great work that he has done in the State and for the environment.”