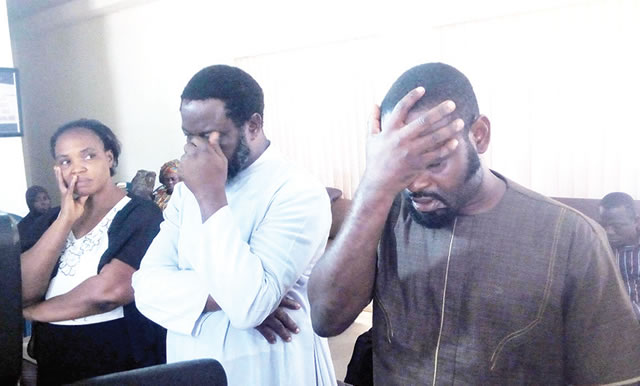 The Rumuolumeni Police Divisional Headquarters in Obio/Akpor Local Government Area of Rivers State have arrested and detained a Catholic priest named Menegbo alongside three other people for alleged child theft.

Police alleged that Menegbo conspired with other suspects Helen and Gift to steal two children at Ngbakatali in Rumuolumeni community, in Obio/Akpor LGA.

The incident occurred on Saturday afternoon and the priest was nabbed by passersby and natives. According to sources, the people, who apprehended Menegbo, took him to the palace of the paramount ruler as custom demands, and they were ordered to take him to the police station for proper investigation.

Father of the two children, Stanley Obisike, from Ibaa community in Emohua Local Government Area of the state, in an interview with journalists, said the priest had visited his shop when his wife was with the children. He said Menegbo pretended to have come to buy something, and later left with the children, who are between one and three years of age, to the other suspects’ apartment in the neighborhood, to discuss with them.

He alleged that the prime suspect, thereafter, took the two children inside his tinted glass black Peugeot car and was about to drive out before the mother of the children raised alarm.

Obisike complained about an alleged plot by some police officers handling the matter to cover up the crime and grant the priest bail without proper investigation. He called on the state Commissioner of Police, Zaki Ahmed, to intervene for justice to prevail.

But when Ahmed was contacted, he said he had already ordered that the bail process is canceled and the suspects transferred to the Anti-Kidnap Unit (AKU) for further investigation.