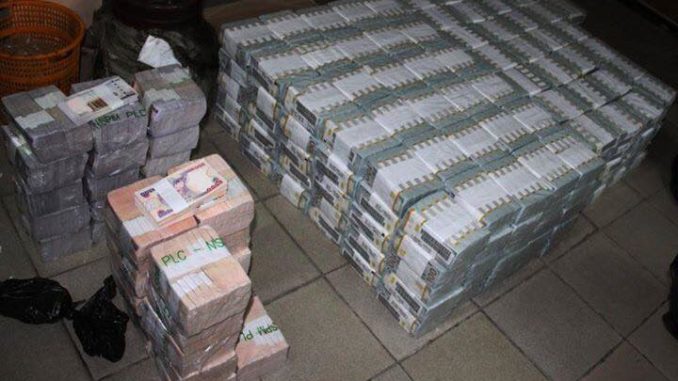 Source- Global Information Network
Neatly-bound bundles of fresh U.S. dollars, Nigerian naira and British pounds totalling over $50 million were recovered by an anti-graft “swat team” in a raid at the Osborne Towers, a luxury building in an upscale section of Lagos.
The raid was orchestrated by the Economic and Financial Crimes Commission (EFCC) acting on a new policy targeting corruption and ordered by President Muhammadu Buhari. The policy provides an incentive for whistle-blowers who stand to receive between 2.5 and 5 percent of the recovered amount when ill-gotten gains are found.
Since the policy was put in place, several raids, based on whistle-blower tips, have resulted in large cash hauls. According to their website, the EFCC recovered unreported funds of $817,000 in a Lagos Market and $41.5 million at a shopping plaza for a total of over $180 million since the beginning of the year.
Now, a referee will be required to decide who owns the massive trove as at least two Nigerian officials have claimed rights to it – Gov. Nyesom Wike of Rovers State or the director-general of the National Intelligence Agency, Ayodele Oke, who claims the cash was the currency for “covert operations.”
Osborne Towers is one of the posh new high-rises built for Nigeria’s pampered elite. Residents include a former governor, a recently retired officer the national oil company, and a TV personality, among others.
Activist lawyer Femi Falana in an open editorial expressed disbelief: “Are Nigerians to believe than an agency of the federal government kept about $50 million in an apartment without adequate security personnel to guard the money? Why was the fund not kept in a safe in the Office of the National Security Adviser?
But this week Nigerians weren’t the only ones having to explain the provenance of large sums of cash. High-level executives at Royal Dutch Shell and the Rome-based oil and gas company Eni, according to an investigation by the watchdog groups Global Witness and Finance Uncovered, knowingly took part in a “vast bribery scheme that robbed the Nigerian people of over a billion dollars.”
Titled “Shell Knew”, the report includes newly-unearthed internal emails showing that the oil companies were aware that a $1 billion payment for “one of Africa’s most valuable oil blocks” would end up in the hands of convicted money launderer and ex-Nigerian oil minister Dan Etete, and from there “would flow onward for bribes.”
“This is one of the worst corruption scandals the oil industry has ever seen, and this is the biggest development so far,” said Simon Taylor, co-founder of Global Witness, which has been investigating the scandal for six years. The oil giants have long-denied that they were aware of any foul playing, saying that they only made payments to the Nigerian government.
“Today’s new evidence shows senior executives at the world’s fifth biggest company knowingly entered into a corrupt deal that deprived the Nigerian people of $1.1 billion,” Taylor continued. “That is more than the country’s entire health budget for 2016.”
Shell is currently facing trial on charges of international corruption; an Italian court will begin hearings on April 20 to determine whether the trial will proceed.
IPMAN Considers New Measures Against Oil Infrastructure Vandalisation
Yemisi Izuora/Agency Report
The Independent Petroleum Marketers Association of Nigeria  said it is weighing options that will lead to ending oil pipeline vandalisation.
To this end the body disclosed it has constituted a surveillance team to deal with the situation across the country.
Chinedu Okoronkwo, the National President of the association, who revealed this expressed concern that pipeline vandalism was causing the nation huge losses.
Okoronkwo said the setting up of the team signified the readiness of IPMAN to support the Federal Government on the surveillance of petroleum pipelines.
He lauded government’s initiative on incessant vandalism on pipeline network with a view to curbing the menace.
Okoronkwo said: “Very soon, the menace will be stamped out.“I urge my members to bear with government on the ongoing challenges facing loading at some depots.

“It is our collective responsibility to check and bring pipelines culprits to book.”

Also, Alhaji Debo Ahmed, the Chairman, Western Zone of IPMAN, expressed the association’s willingness to support efforts to curb incessant vandalism, especially on the system 2B, which he said pumped products from Atlas Cove to five depots in the zone.
He called on the stakeholders in the oil and gas industry to form a synergy with security agencies toward tackling pipeline vandalism.
Ahmed also urged them to join hands with the government in fighting vandalism out of the system, noting that the country had suffered greatly from such menace.
The zonal chairman further urged the stakeholders not to open their eyes to watch some criminal elements destroying national assets.
Ahmed said: “It costs government billions of naira to revive the oil pipelines.
“Members of IPMAN, Western zone, have agreed to join hands with government and other security agents to embark on 24-hour surveillance of the pipelines network.
“We believe that mutual cooperation between the association and security agencies will lead to greater success in the fight against the menace.
“There is need to intensify the fight against vandalism because it is having adverse effects on the economy and the businesses of our members.”
Ahmed also assured that IPMAN would not rest on its oars in providing an environment that would enable security personnel to perform their duty effectively and reduce the impact of pipeline vandalism.
He lauded the management of Nigeria National Petroleum Corporation for re-opening the Ejigbo and Mosimi depots, after one year of closure due to activities of vandals.
The IPMAN zonal chairman expressed optimism that the reopening of the two depots would ease distribution of petroleum products to South-West and put less pressure on marketers going to Apapa private depots to load.