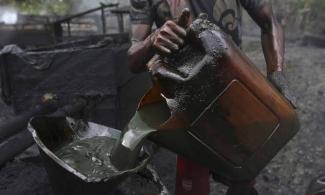 Oil theft has resulted in significant losses for Nigeria, one of Africa’s biggest economies.

There is a report revealing how top Nigerian government officials and security personnel were involved in oil theft and illegal oil bunkering in the Niger Delta region.

Oil theft has resulted in significant losses for Nigeria, one of Africa’s biggest economies.

The illegal activities have also affected monthly revenue remittance to the federation account.

The report titled “Nigeria’s Criminal Crude: International Options to Combat the Export of

Stolen Oil” was published in 2013 by Christina Katsouris and Aaron Sayne.

It read, “Illegal bunkering of Nigerian crude oil probably started in the late 1970s or early 1980s, when the country was under military rule. In most versions of the story, some top army and navy officers began stealing oil – or allowing others to steal it – to enrich themselves and maintain political stability. Some say that oil theft also allowed Nigeria to bust tight OPEC quotas. It seems that local and foreign intermediaries did much of the legwork; Lebanese and Greek actors were most often suspected.

“While no data exist, the stolen oil trade was probably small at this time, perhaps a few thousand barrels per day. Lower global oil prices and Nigerian output, combined with the relatively closed group of actors involved, helped contain the business. Public claims that the Nigerian security forces were involved in stealing oil grew after military rule ended in 1999.

“The return to democracy also gave civilian officials and political ‘godfathers’ more access to the illegal oil trade. Nigeria’s oil sector and political culture opened up dramatically in the 2000s. Rising prices and production allowed more oil to vanish, as did the local ‘resource control’ agitation. The larger profits and cast of characters in play made the ‘rights’ to steal oil more hotly contested. In the Niger Delta, oil theft became a source of stability as well as conflict as its ties to political violence, corruption and organized crime deepened.

“Buyer–seller relationships in the stolen oil trade can vary a lot. Some apparently are quite insular, with operatives in Nigeria shipping oil to a single refinery on pre-agreed terms. In other cases the stolen oil trades in the same markets as legal tanker-loads of crude. Thieves use various means to launder stolen oil into the licit market, all of which can blur the lines between legal and illegal supply.10 As such, pursuing stolen parcels requires an understanding of how legitimate Nigerian oil sales work.

“Each year, most often in the spring or summer, NNPC’s Crude Oil Marketing Department (COMD) awards one-year term contracts to lift the government’s share of oil production – typically 22 to 27 tanker-loads per month in recent months. These contracts go to a variety of customers, mostly private oil-trading firms. Fifty such contracts were awarded in 2012

“NNPC also allocates around 400,000 b/d of the government’s oil to its four refineries. Because the refineries generally run at only around 20 per cent capacity, much of this oil is sold for export. Some of it is stolen from the pipelines that run from onshore export terminals en route to the refineries. In addition to NNPC’s regular export cargoes, the international oil companies (IOCs) ship and sell up to 30 more cargoes each month.

“Under the NNPC term contract system, most legitimate cargoes change hands at least twice: first from NNPC to a trader, and then from the trader to another buyer, most often a refinery. Moreover, of the fifty-term customers for 2012, perhaps only a dozen to twenty have the capacity or will to finance, ship and sell their own cargoes directly to refiners with all the market and price risks involved. Most of the remaining ones are so-called ‘briefcase companies’ – small entities which sell their allocations of crude to the main traders for a margin, most often at the higher end of $0.25–0.40 per barrel in 2013. This adds a third layer of sales transactions.

“The system attracts many shadowy middlemen and ‘politically exposed persons’. This, in turn, creates a crowded, confusing, high-risk marketplace. A typical briefcase company is owned by one or more private individuals acting as a ‘front’ for top political office-holders and power-brokers. Traders and refiners say they receive regular calls from little-known Nigerians offering oil, often on suspect terms. A growing number appear to be businessmen and elites from the Niger Delta. Seasoned buyers spot most such offers as ‘419’, the work of advance fee fraudsters. But at least some of the middlemen have real oil to sell.”

According to the report, Nigeria’s oil sector is one of the world’s least transparent when it comes to sales, associated revenues and physical oil flows.

“The resulting shadows and disorder could easily be exploited by organized criminal interests. Adding to the general bustle and opacity, the traders who hold NNPC term contracts sell their cargoes in the physical spot market – a vast, mostly unregulated space. Organized criminal pursuits such as export oil theft generally thrive in open markets.

“In Nigeria and other countries, relatively recent moves towards economic liberalization, integration with global trade and privatization of state resources, whatever their benefits, also help criminal elements access capital, technical expertise and global crime networks. In such an environment – where many parcels of oil change hands many times to travel in different directions under often opaque conditions – stolen crude can mix in the legitimate market with relative ease.

“Research for this report found no hard evidence that any particular NNPC term customers stole oil. A few Nigerian indigenous traders have been investigated at home for suspected crude theft and fraud, but there were no definitive findings of guilt. Some in the West African crude trading market claim bribery is basic to how the business works, but scandals have been rare. Some international trading houses have been investigated for other offences around the world, from sanctions-busting to manipulation of benchmark prices and environmental damage. More recently, foreign anti-corruption police and NGOs are taking more notice of commodities trading. But if some traders do join forces with criminal networks to move stolen Nigerian oil, the exact mechanics of this remain unclear.”

It also called for the prosecution of oil thieves by the Nigerian government.

“Following the money trail is a key step towards controlling oil theft. Profits drive the business, and lax law enforcement allows funds to move freely around sub-Saharan Africa and beyond. The most promising initiatives here are as follows,” the report read.

“Money-laundering cases and asset forfeitures Convicting oil thieves of laundering money and seizing their assets should be a part of almost any cross-border strategy. Building strong cases would not be easy, and ideally, Nigerian anti-corruption police would help other governments trace the money. But Nigerian paralysis should not excuse other jurisdictions from acting in cases where they have good financial intelligence.

“Anti-bribery laws could offer outsiders another tool for catching oil thieves. Further analysis would be needed to see whether oil theft could meet all the requirements of bribery statutes.

Donor support for the Extractive Industries Transparency Initiative or other pro-transparency lobbies cannot do much to address oil theft. The types of information such programmes provide would not help most outsiders track stolen oil, and civil society might also find engaging too risky.

“New financial-sector regulations – for example, to force disclosure of beneficial ownership, or place limits on use of shell companies – could have more value. There are no easy fixes for Nigeria’s crude oil theft problem. But there are options to help reduce the problem, which could, if managed well, have positive effects on tackling and reducing other forms of transnational organized crime. It is hoped that this report will inform more nuanced views of the problem – and act as a spur to some meaningful action.” Culled From Sahara Reporters

The view expressed in the report does not represent the opinion of Oriental News Nigeria, and is therefore not responsible for any misrepresentation of facts