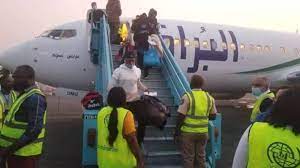 The United Arab Emirates, UAE, which recently imposed visa restrictions to Nigerians has sent 542 Nigerian citizens out of the country.

The Federal Government confirmed that a total of 542 stranded Nigerians were evacuated from the United Arab Emirates.

The Nigerians in Diaspora Commission made this known today (Sunday) via its official twitter handle @nidcom_gov.

“A total of 542 stranded Nigerians in the United Arab Emirates evacuated by the Federal Government arrived Nnamdi Azikiwe International Airport, Abuja, on board the @MaxAirLtd Charted flight.

Chairman of NIDCOM, Abike Dabiri-Erewa, had earlier in August, noted that the government would evacuate the stranded Nigerians in the middle eastern country.

Dabiri-Erewa, during a press briefing in Abuja, noted that some of the Nigerians who were profiled in the UAE neither had passports nor other means of identification.

There has been a recent spike in the number of harassment cases reported by Nigerians in the UAE.

Recently, a young lady simply identified as Dun ChiChi on twitter was jailed for one year by the UAE government.

The lady had posted pictures of mistreatment by officials of the UAE immigration on her Twitter page.