Ukraine To Resume Grain Export After Deal With Russia 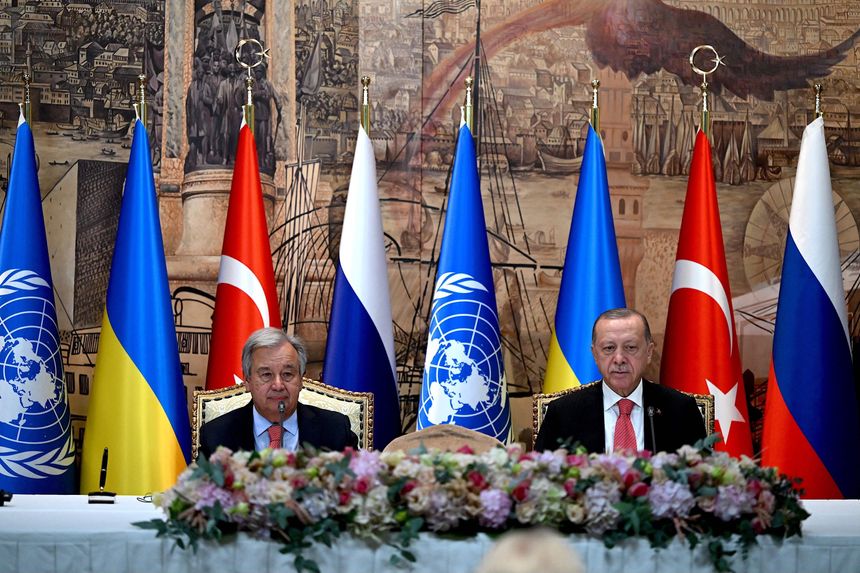 Russia on Wednesday accepted to rejoin a wartime agreement that allows Ukrainian grain and other commodities to be shipped to world markets.

The U.N.’s refugee chief, meanwhile, put the number of Ukrainians driven from their homes since the Russian invasion eight months ago at around 14 million.

It is “the fastest, largest displacement witnessed in decades,” said Filippo Grandi, who heads the United Nations High Commissioner for Refugees.

In announcing that Russia would rejoin the grain pact, President Vladimir Putin said Moscow had received assurances that Ukraine would not use the humanitarian corridors to attack Russian forces. He warned that Russia reserves the right to withdraw again if Kyiv breaks its word.

Putin praised Turkey’s mediation efforts to get the deal back on track, as well as Turkish President Recep Tayyip Erdogan’s “neutrality in the conflict as a whole” and his efforts at “ensuring the interest of the poorest countries.”

Ukrainian President Volodymyr Zelenskyy said he also thanked Erdogan on Wednesday, “for his active participation in maintaining the grain agreement, and his unwavering support for the sovereignty and territorial integrity of Ukraine.”

Russia had suspended its participation in the grain deal over the weekend, citing an alleged drone attack against its Black Sea fleet in Crimea.

Ukraine did not claim responsibility for an attack, and Zelenskyy said Wednesday that Moscow’s return to the agreement showed “Russian blackmail did not lead to anything.”

Erdogan said shipments would resume Wednesday, prioritizing those to African nations, including Somalia, Djibouti and Sudan. That’s in line with Russia’s concerns that much of the exported grain had ended up in richer nations, since Moscow and Kyiv made separate agreements with Turkey and the U.N. in July.

U.N. humanitarian chief Martin Griffiths said Monday that 23% of the cargo exported from Ukraine under the grain deal went to lower- or lower-middle-income countries, which also received 49% of all wheat shipments.

Seated at the dinner table with his wife Olena in a village on the outskirts of the capital, Kyiv, Yaroslav Vedmid can’t count the number of times they’ve eaten in the dark since Russian attacks triggered the blackouts beginning in early October. (Nov.1)

Ukraine and Russia are major global exporters of wheat, barley, sunflower oil and other food to developing countries. A loss of those supplies before the grain deal had pushed up global food prices, led to soaring energy costs, and helped throw tens of millions into poverty.

The July agreement brought down global food prices about 15 per cent from their peak in March, according to the U.N. After the announcement Wednesday that Russia would rejoin the deal, wheat futures prices erased increases seen Monday, dropping more than 6 per cent in Chicago.

Meanwhile, in Kyiv, the local power-grid operator said electricity had been restored after a wave of Russian drone and artillery strikes had targeted energy infrastructure. About 300,000 households reportedly got their power back, but local authorities called for controlled blackouts to reduce strain on the system.

Grandi, the U.N. refugee official, noted that Ukrainians are about to face “one of the world’s harshest winters in extremely difficult circumstances.”

He said those include the continuing destruction of civilian infrastructure, which is “quickly making the humanitarian response look like a drop in the ocean of needs.”

Grandi said the 14 million Ukrainian refugees had increased the overall number of displaced people worldwide to more than 103 million.

Power outages also were reported in the southern cities of Nikopol and Chervonohryhorivka after “a large-scale drone attack,” Dnipropetrovsk Gov. Valentyn Reznichenko said. The two cities lie across the Dnieper River from the huge Zaporizhzhia Nuclear Power Plant.

Russia and Ukraine have traded blame for months for shelling at and around the plant that the U.N.’s nuclear watchdog warned could cause a radiation emergency. In a development easing some fears, Ukraine’s state nuclear company Energoatom, said the plant has been reconnected to the country’s power grid after shelling forced it to rely on generators to cool spent nuclear fuel.

The plant is held by Russian forces, but Ukrainian staff continues to run it.

The company also said Russian soldiers have cordoned off the plant’s spent nuclear-fuel storage facility and began unspecified construction there. “They don’t let anyone in, they don’t report anything,” the company said.

Russian shelling continued in southern and eastern Ukraine, causing at least four civilian deaths between Tuesday and Wednesday, according to Zelenskyy’s office.

“The epicenter of the fighting” was around the city of Bakhmut, neighboring Soledar and the wider Donetsk region, Ukraine’s Deputy Defense Minister Hanna Malya told Ukrainian TV. She said Ukrainian defenders around Bakhmut were facing a “very difficult” task.

“But the main thing is that Ukraine will not give up a single inch of land,” she said.

In southern Ukraine, Russian-installed authorities in the occupied Kherson region announced they were temporarily halting traffic across the wide Dnieper River, citing “increased military danger” as Kyiv’s forces edged closer to the region’s capital, the city of Kherson.

The move would also prevent civilians from crossing back into Ukrainian-held territory.

The Moscow-backed authorities have said they are relocating tens of thousands of civilians further into Russian-held territory in anticipation of the Ukrainian counterattack.

The province was overrun by Russian forces early in the war, and both sides have been girding for a major battle over it.

In another development, Belarus and Russia began preparations for large-scale joint military exercises. Belarusian Defense Minister Viktor Khrenin didn’t specify the dates for the exercises, dubbed Union Shield-2023, or the number of troops that would take part.

Russia has previously used Belarus, an economically dependent ally, as a springboard to send troops and missiles into Ukraine. Kyiv fears that the Belarusian army will be directly drawn into the war, striking from the north where the countries share a 1,080-kilometer (671-mile) border.