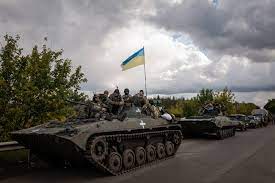 Ukraine called on the West to “significantly” increase its military aid to Ukraine after pro-Kremlin authorities in four Moscow-held regions of Ukraine declared victory in annexation votes.

The statement also said that Russian-staged votes in four Ukrainian regions on becoming part of Russia were “null and worthless”, and that Ukraine would press on with efforts to liberate Ukrainian territory occupied by Russian forces.

Ukrainian Foreign Ministry said that Ukraine “will never agree to any ultimatums.”