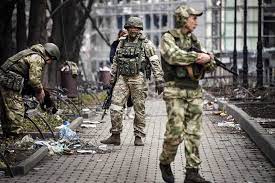 The Ukrainian army is continuing its counter-offensive in the east, claiming on Monday to have recaptured 20 settlements from Russian forces in just 24 hours.

For Tetyana Ogarkova of the Ukraine Crisis Media Center NGO, the advance does not constitute a military turning point but has reinforced Ukrainian hopes of an eventual victory over Moscow.

The Ukrainian army has launched a lightening counter-offensive that caught Russia‘s defences off guard. Ukrainian forces have been accumulating military successes in the east of the country since September 7, a reconquest that now extends from Vovchansk in the northeast of the Kharkiv region (close to the Russian border) to the strategic town of Izium some 150km to the south.

President Volodymyr Zelensky said Monday that Ukraine had retaken 6,000 square kilometres (2,320 square miles) from Russian control since the start of the month.

A timelapse of the Ukrainian offensive in Kharkiv Oblast so far.
A senior US military official on Monday confirmed that Russian forces had “largely ceded their gains” around Kharkiv and said Russian soldiers appeared to be retreating over the border back into Russia.

FRANCE 24 spoke to Tetyana Ogarkova, a journalist in charge of the international desk at the Ukraine Crisis Media Center, to find out what this recent military success means for Ukraine.

How can we explain this military breakthrough? After announcing a southern counter-offensive in early September, was the Ukrainian army hoping to have the element of surprise in the east?

Tetyana Ogarkova: Indeed, for months, military experts have been talking about preparations for a counter-offensive in the south – whereas now we see that the operation to retake parts of the Kharkiv region was meticulously planned. The Ukrainian army followed a very precise route, passing through Balakliya, Kupiansk and then Izium to regain control of the railways used by Moscow to transport supplies to its troops in the south. The operation’s objective went beyond the liberation of the Kharkiv region – it was actually aimed at weakening the Russian troops in the Donetsk and Luhansk regions.

To do this, the Ukrainians changed their communication strategy. Official statements about the situation on the ground have become much more evasive and they have restricted journalists’ access to the southern and eastern fronts. This adds to the “fog of war”.

Yet despite this careful preparation, the scale and speed of this reconquest surprised even the military itself, which had expected more resistance from Russian troops.

The Security Council of the Russian Federation, chaired by President Vladimir Putin, opted for an organised withdrawal, preferring to save its troops in the area. The scenario was similar to the withdrawal from the suburbs of Kyiv in late March-early April that happened when Russian troops, semi-encircled, no longer had the possibility to advance.

Is the city of Kharkiv, which was one of Moscow’s main targets when the Russian operation was launched, now better protected?

Unfortunately, it is not, because this Russian withdrawal does not change its bombing capacity. On Sunday evening, Russian missiles hit an electricity station, causing a blackout in the whole region, including in the Kharkiv metro, where passengers were stranded.

Kharkiv is only 25 kilometres from the border, so it is very easy for the Russians to bomb the city using modern artillery but also with Soviet-era equipment, which it possesses in large quantities, such as the Uragan (hurricane) multiple-launch rocket system or S-300 surface-to-air missiles. They were initially intended for anti-aircraft defence but can also be used for ground attacks.

The Russians tried to take the city in March but did not succeed and abandoned the plan. However, they are continuing their strategy of terror, which consists of bombing it relentlessly to make life impossible for the inhabitants who refused to leave.

Does this recapture of much of the Kharkiv region mark a turning point in the conflict?

In my opinion, it is not a real turning point but rather a strategic victory. Ukrainian forces are demonstrating here that they are capable of carrying out impressive large-scale operations. In less than a week, they have taken back more territory than the Russians have conquered over the course of the last four months.

With this counter-offensive, Ukraine wants to prove that victory is possible. It shows that it is able to use Western weapons effectively and that additional increases in arms deliveries may determine the outcome of the war.

Meanwhile, Russia is trying to convince the West that the price of involvement in Ukraine is too high given the energy crisis now affecting Europe. It is also falling back on the “Almighty Russia” narrative – widely repeated by state media – which aims to convince Russians that they cannot possibly lose to Ukraine since they are better-equipped and a nuclear power.

It is true that the balance of power remains largely in Russia’s favour, both in terms of troop numbers and arms, despite Western support. This is why Kyiv decided to strike hard before a harsh winter that could prove decisive on the battlefield.