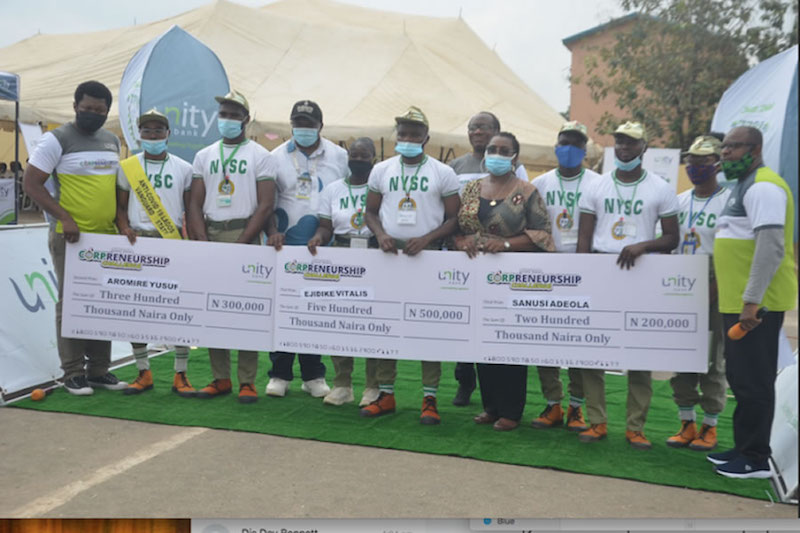 The winners emerged after their business plans were assessed by a panel looking out for business ideas that demonstrate originality, marketability, future employability potential of the product, and knowledge of the business.

The Unity Bank Corpreneurship Challenge has gradually joined the league of some of the most impactful, youth-focused entrepreneurship development initiatives in Nigeria, empowering no fewer than 100 young entrepreneurs over the past three years.

Recently, one of the beneficiaries in Sokoto, Beulah Yusuf, who emerged as second runner-up in one of the editions successfully launched her recycling business with the grant received from the Bank. She unveiled her products widely acclaimed for addressing environmental pollution and waste management inefficiencies, underscoring the Bank’s motivations to sustain the initiative.

“When we launched the initiative in 2019, we set out to empower the next generation of entrepreneurs that will disrupt the job market by creating much-needed jobs across all sectors. Today, we have come a long way and the Corpreneurship Challenge has lived up to its billing.”

Represented by Regional Manager, Port Harcourt Region, Unity Bank Plc, Mr. Eto Ukpe, Akinmade reiterated the Bank’s commitment to sustaining the initiative and mainstreaming the Corpreneurship Challenge as a reliable and impactful entrepreneurship and business empowerment and mentorship programme in the country.

“What we have today in the labour market is far from the ideal. However, it is not enough to keep complaining. We must make lemonade out of lemon. We believe that the Corpreneurship Challenge has proved to be one of the most creative approaches to tackling the intractable crisis we have in the job market in Nigeria.”

“Our goal is to expand this programme to all 36 states and sustain it for as long as possible to achieve record impact. We continue to encourage the winners to continue to learn the rudimentary lessons necessary to build a successful business. We emphasize that the budding entrepreneurs who take part in this initiative constantly think about the challenges they will face and put the same energy they all have displayed in preparing for this contest in their businesses as they face their post-service year ahead.”

The Corpreneurship Challenge, which has earned the Bank national recognition for its impact on youth empowerment and job creation, has continued to elicit growing interest among the corps members, attracting over 2000 applicants and participation in every edition.

In partnership with the NYSC Skill Acquisition and Entrepreneurship Development, SAED, the initiative prominently features a business pitch presentation that provides the participants with the opportunity to present their business plans and stand a chance to win up to N500, 000 cash in the business grant.

So far, Unity Bank has invested over N100 million in the initiative which has now produced 118 winners since it was launched in 2019.

Ghana’s economy expanded by 3.6 per cent in 2022 – African Development Bank