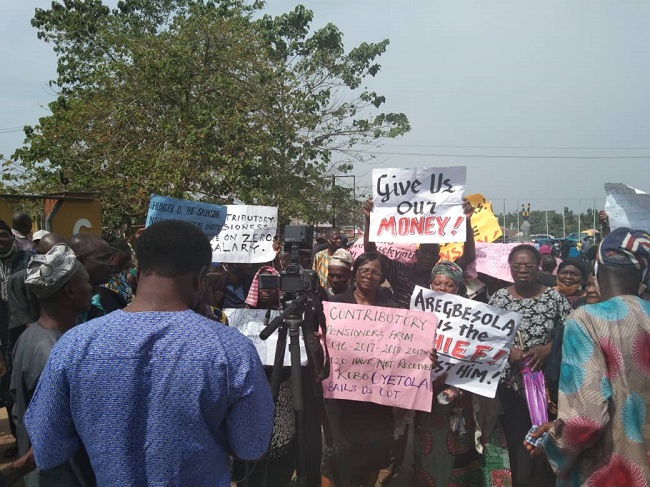 Pensioners in Ekiti on Tuesday went on their knees in supplication to God over the non payment of their gratuities by the state government.

The News Agency of Nigeria (NAN) reports that the pensioners attended an interdenominational prayer session at the secretariat of the Nigeria Union of Pensioners (NUP) Oke-Bareke in Ado-Ekiti.

Some of the pensioners, who were moved to tears, prayed God to touch the heart of the State Governor, Dr Kayode Fayemi, to pay the arrears of their gratuities and pensions.

The pensioners also prayed for the growth of the economy and peace in Nigeria, particularly during the forthcoming elections.

Speaking with newsmen shortly after the prayers, the NUP Chairman, Ekiti state chapter, Mr Joel Akinola, noted that many pensioners in Ekiti have died without getting their benefits while some are battling with various illnesses due to lack of funds to treat themselves.

According to him, Ekiti government is owing gratuities to the tune of N2 billion and outstanding pensions accumulating to millions of naira.

Ajibola said the pensioners hope that the governor would pay a substantial amount of the debt before leaving office.

“Each time there is transition of power, it’s often difficult to agitate or confront the new governor because they will be quick to tell you that they are not the one owing us.

“We have laboured and served our nation and state meritoriously for 35 years, we deserve better than what we have been getting,” he lamented.

The NUP state chairman appealed to the state government to endeavour to pay them to enable the few ones who are still alive make use of the money to take good care of themselves.

Earlier, in an exhortation, the Chief Imam of Ansarudeen Central Mosque, Ado Ekiti, Imam Abdullahi AbdulMutallib, urged the pensioners to build more faith in Allah, saying he will touch the hearts of those in government to attend to their needs.

Also, Pastor Isaac Ojo urged the pensioners not to be discouraged by their present situation, saying that God is able to intervene. (NAN)