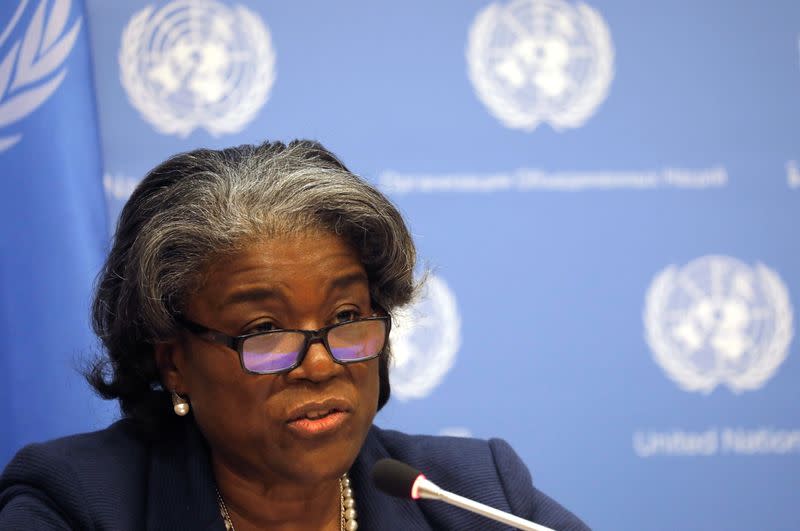 The United States on Sunday informed the United Nations Security Council that it has made clear to Israel, the Palestinians and others that it is ready to offer support “should the parties seek a ceasefire” to end the worsening violence between Israel and Palestinian militants in Gaza.

“The United States has been working tirelessly through diplomatic channels to try to bring an end to this conflict,” U.S. Ambassador to the U.N. Linda Thomas-Greenfield told the 15-member council. “Because we believe Israelis and Palestinians equally have a right to live in safety and security.”

Washington – a strong ally of Israel – has been isolated at the United Nations over its objection to a public statement by; the Security Council on the worst violence between Israel and the Palestinians in years because it worries it could harm behind-the-scenes diplomacy.

“We call upon the U.S. to shoulder its responsibilities; take a just position, and together with most of the international community support the Security Council in easing the situation,” said Chinese Foreign Minister Wang Yi; who chaired Sunday’s meeting because China is president for May.

U.N. Secretary-General Antonio Guterres said the United Nations is; “actively engaging all sides toward an immediate ceasefire” and called on them “to allow mediation efforts to intensify and succeed.”

The truce efforts by Egypt, Qatar and the United Nations have so far offered no sign of progress.

The United States sent an envoy to the region and President Joe Biden spoke with Netanyahu and Palestinian President Mahmoud Abbas on Saturday.

“In all these engagements with Israeli officials, the Palestinian Authority, and all regional partners; the United States has made clear that we are prepared to lend our support and good offices should the parties seek a ceasefire,” Thomas-Greenfield said.

Egyptian Foreign Minister Sameh Shoukry told the Security Council that “concessions must be made; as a price to be paid for peace so as to spare people from paying the heavy price of war.”

The death toll in Gaza jumped to 188 overnight, including 55 children; amid an intensive Israeli air and artillery barrage since the fighting erupted last Monday.

Ten people have been killed in Israel, including two children; in thousands of rocket attacks by Hamas as well as other militant groups.

“Each time Israel hears a foreign leader speak of its right to defend itself it is further emboldened to continue murdering entire families in their sleep;” Palestinian Foreign Minister Riyad al-Malki told the Security Council.

U.N. Middle East envoy Tor Wennesland urged the international community to “take action now to enable the parties to step back from the brink.“

Israel Vows To Pound Hamas To Submission, As 42 Die After Sunday’s Airstrike