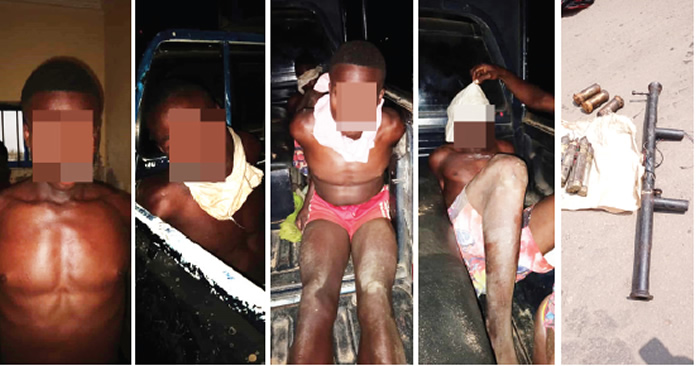 Some  suspected members of a kidnap gang have said they abducted the traditional ruler of Ogwaniocha community in the Ogbaru Local Government Area of Anambra State, Igwe Oliver Nnaji, to take over the oil proceeds of the community.

Nnaji was kidnapped on November 15, 2021, when gunmen invaded his palace at midnight and razed the building.

But the Special Forces of the Nigerian Naval Base, Onitsha, raided the Ochan forest camp of the hoodlums at 1.20am on Friday, killing 10 of the suspects and arresting five of them.

During interrogation on Monday, one of the suspects, Victor Ibenegbu, aka Network, 32, said his group was behind the serial killings and arsons in the community.

He said, “We abducted the Igwe because he did not allow us to control the oil proceeds in our community. Because we wanted to be in charge of the proceeds, we formed a group called ‘Lion squad’ headed by one Okwudili, who is a native doctor in the community, but he is based in Asaba and comes through the river near the forest to meet us.

“Each time we are to carry out an operation, he prepares charms for us, and a young girl carries the charm in a calabash naked around the forest. We stormed Igwe Nnaji’s palace on November 15, 2021, kidnapped him and burnt down the palace.

“We first kept the Igwe in one of the buildings in the community until at night when our leader directed us to move him to the forest. Right now, I don’t know where the Igwe is because our leader took him away and since then we have not set our eyes on him.”

Another suspect, Egbuna Anyakoha, said he overhead their leader telling a member that the monarch had been beheaded.

The 36-year-old said the gang leader who recruited them promised to pay them N1m every month to join him in fighting the community over the control of the oil proceeds.

The leader of the naval team that carried out the operation, Suleiman Agabi, said the suspects were arrested based on intelligence, adding that his men swooped on their hideout and engaged them in a gun battle.

“They go to communities around the borders, kidnap their traditional rulers and force the communities to dance to their tunes. They kidnap the rulers and use the ransom to buy guns, prepare charms and maintain their operations,” Agabi added.

Among the items recovered from the suspects were live ammunition, cartridges, guns and charms. Source PUNCH.

Why Jonathan must support Igbo presidency in 2023 – Ohanaeze