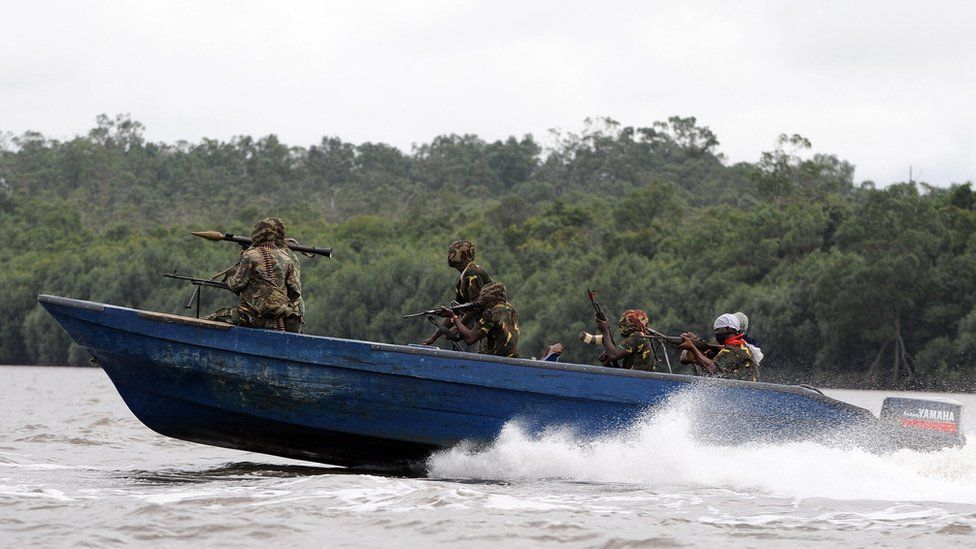 In the oil-producing south, security challenges are nothing new.

It is Nigeria’s biggest foreign export earner, and militants in the Niger Delta have long agitated for a greater share of the profit. They argue the majority of the oil comes from their region and the environmental damage caused by its extraction has devastated communities and made it impossible for them to fish or farm.

For years, militants pressured the government by kidnapping oil workers and launching attacks on security personnel and oil infrastructure, like pipelines.

To address this, ex-president Umaru Musa Yar’Adua launched a presidential amnesty programme in 2009, which saw the formal end of the Niger Delta militants.

But armed cult groups still pose a security challenge in the region and industry officials have been warning that militancy is once again picking up.

Energy and climate policies made in the halls of Brussels or Washington have a profound impact elsewhere. This is particularly applicable to Africa.

The continent’s oil and gas producers are facing a tough future and they need help from both the outside world and within their own countries to continue.

Nigeria and Angola dominate Sub-Saharan petroleum output. A string of moderate-sized producers are mostly seeing declining production, such as the Republic of Congo, Cameroon, South Sudan, Ghana, Gabon, Equatorial Guinea and others.

Aspiring new entrants where large resources have been found include Senegal, Kenya and Uganda for oil and South Africa, Senegal, Mauritania, Mozambique and Tanzania for gas. Finally, exciting but risky frontiers beckon in countries such as Somalia, Liberia, Gambia and Namibia.

But will these hydrocarbon resources attract the investment needed to reach market? The International Energy Agency’s recent report on net-zero carbon emissions by 2050 indicated that no new oil or gasfield developments globally would be required from now on.

At first glance, it looks bad for new African explorers and producers.

It comes amid a growing unwillingness by banks and international financial institutions to fund fossil fuel projects.

Major multinational oil companies, particularly Shell and BP, have plans to reduce their overall output. BP expects its oil and gas production will fall 40 per cent during this decade and has no plans to enter any new countries for exploration.

It has downscaled its planned liquefied natural gas (LNG) development in Senegal-Mauritania, despite the large resources and attractive investment terms. It is considering putting its fields in Algeria and Angola into joint ventures with Italian super-major ENI, possibly a prelude to spinning them off entirely.

Shell, meanwhile, was ordered by a Dutch court in May to reduce its greenhouse gas emissions by 45 per cent by 2030, which if upheld would mean it too would divest assets and limit new projects. As a continent short of capital, such developments put Africa at a significant disadvantage.

In the early 2000s, Chinese and Indian companies would have stepped in, but they have been surprisingly inactive outside their home bases in recent years, other than focusing on low-cost resources in the Middle East.

It has to be said that some African countries have not helped themselves. The first oil discovery in landlocked Uganda was made in 2006 but production will only start in 2025 after long wrangles over tax, a pipeline route and construction of a local refinery. This has been a heavy burden on frontier exploration specialist Tullow, souring the appetite for other explorers.

Angola faces a sharp decline in production as its ageing fields have not been replaced, threatening its ability to meet its Opec+ allowance. Yet up to 2017, it engaged in long disputes with Cobalt, an American firm that had made sizeable new finds. Its national oil company Sonangol was looted by the previous administration, left with just $309 in its bank account and heavily in debt to partners.

Nigeria’s huge and low-cost reserves have tantalised investors for decades, but production in 2019 was only at the level of the early 1970s, blighted by corruption, community unrest and environmental damage. A bill on a new petroleum legal framework has spent a decade making its way through parliament, holding up investment while companies await the final result.

Tanzania has also made life difficult for the companies in its giant deepwater gasfields, leading Equinor to write down the entire $982 million value of its assets in January. Mozambique to the south, with even larger gas finds, looked to be a new star of the LNG scene, but work on its two onshore projects in the northern Cabo Delgado province has been halted by an Islamist insurgency.

So what are the options for current and aspiring African petroleum producers? First, they need to improve investment and fiscal terms, recognising that the oil and gas boom of a decade ago has gone, and that the new situation is less favourable. Gabon improved its tax terms in 2019 with an immediate uptick in interest and Tanzania’s President Samia Suluhu Hassan, who took over in March, has already struck a more positive note.

Second, they must attract new breeds of investors. This can include national oil companies venturing overseas and smaller independents in the style of Kosmos in Mauritania and Senegal, and Africa Oil, part of the Swedish Lundin Group, which has assets in Kenya, South Africa and Nigeria.

Third, they can improve their own state oil firms and encourage local private players. Angola may launch an initial public offering (IPO) for Sonangol next year.

Domestic Nigerian ventures have established a growing presence, picking up marginal assets as the western super-majors slim down, though with some headaches over their financial capability. Ghanaian company Springfield has enjoyed major offshore exploration success.

Fourth, they need a winning energy transition strategy that can combine the low carbon footprint of production and cut flaring and methane leakage. Domestic gas supply to reduce energy poverty can dovetail with renewables.

Environmental, energy and economic justice go together. Mozambique’s LNG plans would require $50-60 billion of expenditure, now challenged by growing fossil fuel boycotts. Yet western and international institutions are not queuing up to put $60bn into renewables or other low-carbon projects in any African country. The implication of the IEA’s report seems to be that fossil fuel production in wealthy countries such as Canada, the US and Norway should continue to the exclusion of African resources.

The continent faces serious damage from climate change. But African oil producers also face huge challenges from a transition away from fossil fuels. Their governments, companies and people can step up international co-operation to make the most of all their resources, oil, gas and low-carbon. Called From National News

Man Arrested With 548,000 Tablets Of Tramadol To Be Charged- NDLEA