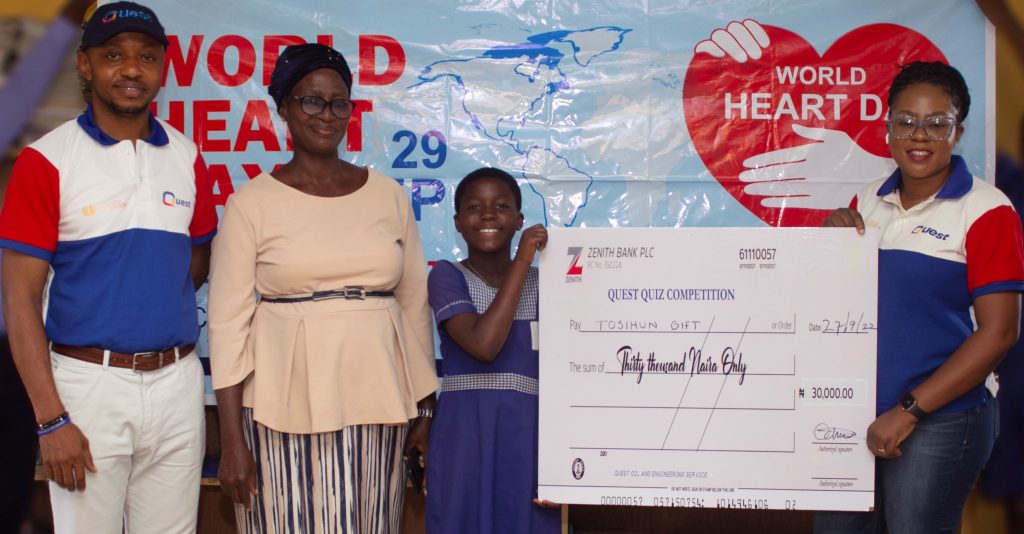 Tosihun Gift, a primary 6 pupil of Ikota Government Primary School, has emerged the champion of the maiden edition of the Quest Quiz Competition, an initiative of Quest Oil, an indegineous energy company with a robust portfolio of investments in the upstream, midstream and the downstream sectors.

At the competition and prize-giving ceremony which was held in Lagos, the competition produced two runners-up and a grand prize winner walked away with N30,000 and lots of other prizes.

The second position went to Kasali Karimat, a primary 5 pupil with N15,000 reward and other branded gift items such as school bag and writing materials. Kasali fought her way to beat Joshua Olaniyi who took the third position.

Speaking at the occasion, the Director of Communications, Nigerian Heart Foundation, Mr. Abiola Awe, thanked the management of Quest Oil for providing a platform to enable the people in the grassroot to benefit from the initiative. He stated that awareness creation is needful in bridging the social inequality gap which often negates access to better health care. He harped on the need for good education and public private partnership to support the people who are most vulnerable to these health challenges.

According to Mr. Awe, taking care of the heart is fundamental towards building a healthy society. The Nigerian Heart Foundation is excited to see her partnership with Quest Oil already yielding good fruits.

In her remarks, the General Manager, Business Operations, Quest Oil, Dr. Ochuwa George, noted that the Quiz Competition is an intentional effort to provide a level playing field for the primary school students to compete while learning about basic science and healthy lifestyles. She said that the choice of Ikota Government Primary School came about due to the need to support the school in her quest for excellence.

Also speaking at the event, the Corporate Communications & Branding Manager, Gerald Moore, said that good health is good business and a happy customer is a loyal customer. According to him, Quest believes in caring for her stakeholders and in this case, teaching the students healthy lifestyles is a way of catching them young. He further said that the initiative will go a long way towards creating good ambassadors.

The Quest Quiz competition which is in its maiden edition, is aimed at encouraging students in the primary and secondary schools to learn and adopt good lifestyles.