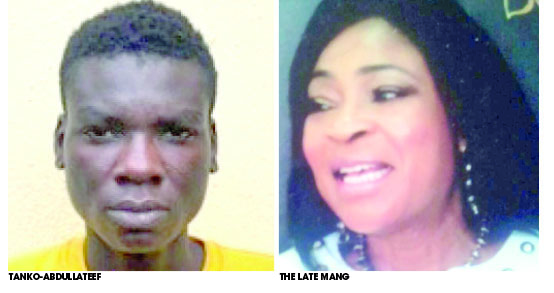 A business man, Mr Jude Edeh, on Monday narrated to a Lagos High Court sitting at Tafawa Balewa Square, how the body of Miss Mabel Okafor-Mang, a banker, was discovered in her sitting room.

Edeh, an associate pastor at the Redeemed Evangelical Mission, Lagos, said this while giving evidence at the ongoing trial of a security guard, Abdullateef Tanko, charged with the alleged murder of his employer.

At the resumed hearing, Edeh, the third prosecution witness, told the court that the deceased was a member of his church, who participated actively as a planning committee member at the church’s anniversary programme.

Edeh, who was led in evidence by the Lagos Prosecution counsel, Mr Olayemi Shofolu, narrated that on Aug. 19, 2016, members of the church were worried when the deceased did not show up for events.

Edeh said he, therefore, went to the deceased’s office at Ikota shopping complex Lekki, to find out about her whereabout but was told by her staff that she had not been to the office for two days.

The witness said he drove to the deceased’s house at VGC with her staff to check on her.

According to him, the security at the estate gate asked them to call the deceased first but all her phones were switched off.

He said the estate security supervisor then accompanied them to the house.

Edeh said after several knocks at the gate, the deceased’s tenant opened the gate, and informed them that he had not seen the deceased for two days.

“The supervisor went round the compound, opened the window, and shouted “the worst has happened, the woman is lying dead in her sitting room.”

“The supervisor reported the incident to the estate police while I informed our senior pastor in the church.

“The deceased elder brother, Dr Nduka Okafor-Mang called and I told him to come that we were at the house with other church members,” Edeh narrated.

He also narrated how they broke the kitchen door to gain entrance and found out that the front door was not locked.

The witness said he saw marks of stab wounds on the woman’s stomach but did not count the wounds.

After his evidence, the witness was cross-examined by the defendant’s counsel, Mrs Love Ikhine.

The witness answered questions and said he did not know the person that killed the deceased.

Edeh said that he had known the deceased for 10 years and added that the only time he visited the deceased at her residence was in 2011 when they were planning to build their church.

When asked if he knew all the woman’s family members, he said no, that he only met them in church during the deceased 50th birthday celebration in 2016.

However, Justice Yetunde Ogunsanya, adjourned the case until March 15 for continuation of trial.

The prosecutor, Shofolu, had said that the defendant allegedly murdered the banker on Aug. 17, 2016, at about 7:30 p.m., at J68B, Close 9, Victoria Garden City Ikota, Ajah Lekki area, of Lagos State.

Shofolu said the defendant murdered one Mabel Okafor-Mang, by stabbing her with a kitchen knife on her stomach.

According to him, the offence contravenes Section 233 of the Criminal Law of Lagos State, 2015.

Tanko pleaded not guilty to the charge against him. (NAN)

Google selects 15 startups in Nigeria, 6 others for Accelerator Africa