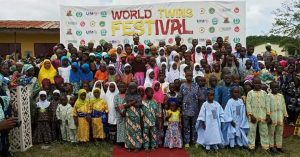 Oba Jimoh Titiloye, the Olu of Igbo-Ora in Oyo State, has announced that the 2021 edition of the World Twin Festival would hold Oct. 3 to Oct. 9 in the ancient town.

Oba Titiloye disclosed this on Wednesday in a statement he made available to the media in Lagos.

He said that the theme of the festival “Twinning for Global Medical Breakthrough,” was deliberately chosen to celebrate the medical team of National Hospital, Abuja that successfully separated the conjoined Martins twins in 2020.

The News Agency of Nigeria reports that

the twin girls – Goodness and Mercy Martins – were successfully sperated by a team of 78 medical doctors after 13 hours operation at the National Hospital, Abuja on Nov. 14, 2020.

They were born by cesarean-section on Aug. 13, 2018, attached at the chest and abdomen with a large blood vessel connecting their hearts through their chest walls.

The monarch said that the one-week  festival would kick off with a special church thanksgiving service at the Methodist Church, Igbo-ora, Oyo State.

“To be followed on Monday Oct. 4 by the traditional cleansing of the town, an exercise known locally as Iwure.

“The much anticipated twins traditional games will hold on Thursday Oct. 7; this will also feature exhibition of local games for the twins by the community.

“Friday Oct. 8, a special Jumat Twins Service at the Igbo-Ora Central Mosque will hold, then the royal homage to the paramount ruler of Igbo-Ora land.

“The Friday night will feature a special tribute procession night in honour of departed twins, tagged “Twinless Night of Honour,” he said.

The monarch said that the grand finale which is also the Twins Pilgrimage Day comes up on Saturday Oct. 9 at the festival arena, Methodist Grammar School, Igbo-Ora, Oyo State.

“Other activities of the festival include twins concert, circus performances, twins appellation, twins fashion and parade and talent show, among other activities.

“Gov. Seyi Makinde of Oyo State will be the Chief Host, while Oba Lamidi Adeyemi, the Alaafin of Oyo, will be the Grand Patron of the festival.

He said that all local and international tourists at the festival would be made to observe all COVID-19 protocols during all scheduled activities of event.

NAN reports that the World Twins Festival is an annual cultural tourism event celebrated to promote the multifunctional twinning cultural heritage of Igbo-ora, known as  the land of twins.(NAN)

COVID-19: New Mu variant could be more vaccine-resistant –WHO

28-year-old herdsman in court over alleged kidnap in Ekiti