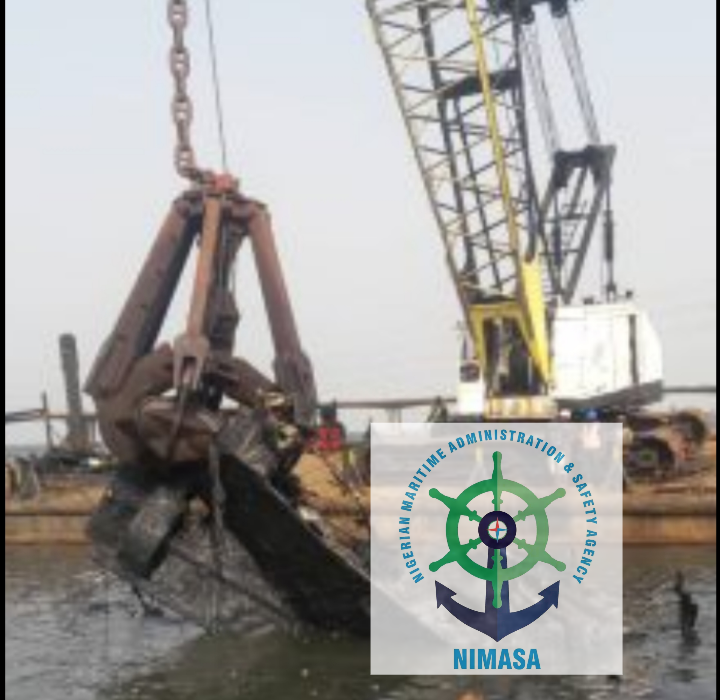 The agency’s Director-General, Dr Bashir Jamoh, made this known in a statement made available to newsmen in Lagos on Sunday.

Jamoh said that the impact of the entire exercise on the marine environment was being assessed by NIMASA.

He said this during a review session of the ongoing wreck removal exercise by the Agency.

“We shall also conduct a full bottom sweeping operation by deploying sonar imagery system with a view to establishing any existing natural or artificial obstacles lying on the seabed within the area of survey for this phase of the wreck removal exercise.

“NIMASA is also taking into consideration, the impact of the entire operations on the marine environment with a view to ensuring safety of marine lives.

“We are monitoring the entire exercise closely to guarantee total removal of all identified wrecks,” he said.

Jamoh noted that amongst those already removed include a completely submerged Barge which was lying over 10 meters deep along the Badagry channel on coordinates 711006.1 Easting and 535294.9 Northing.

He said that the agency had also successfully removed two other completely submerged barges beneath the water at 530924.9 Northing and 710608.3 Easting.

“Another completely submerged Barge which has been lying dangerously along the channels on 711617.5 Easting and 533601.6 Northing has also been successfully removed and taken to the dumpsite located in Kirikiri Lagos.

“These are amongst the identified wrecks removed along the creek from Tin-Can Island to Navy Town,” he said.

He added that NIMASA had worked with the Hydrography Department of the Nigerian Navy to identify these wrecks as critical.

“We worked closely with the Hydrography Unit of the Nigerian Navy in charting the waters and establishing these wrecks as critical for immediate removal.

“This Badagry creek is a commercial route with passenger vessels plying and we place a premium on safety of lives and properties.

“We are confident that on completion, operations of the Navy in patrolling our waters will also be enhanced as the routes will be free of wrecks,” he said.

Jamoh said that NIMASA was charged with the responsibility of ensuring safety of navigation in line with the Wreck Removal Convention that was adopted at the International Maritime Organisation, IMO, diplomatic conference in Nairobi kenya in 2007 and entered into force on April 14, 2015.

“Nigeria was the eight country to ratify the Nairobi International Convention on the Removal of Wrecks,” he said.(NAN)