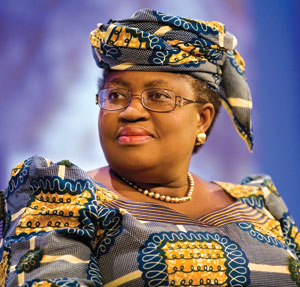 The Director General, World Trade Organisation, Dr Ngozi Okonjo-Iweala has disclosed that that Nigeria ranked 103 out of 167 countries in global logistic. According to her “Nigeria is 103 out of 167 countries in logistics and that means we have a long way to go. For me that is a potential area we can invest to improve our logistics so we can take advantage of trade within the Africa Continental Free trade Area. We have difficulty and challenges with our economy, we have to move fast, we have potential to do so much better and trade is a very strong part of that story”.

She further said that Nigeria accounts for 0.33 per cent of global trade and 19 per cent of African trade. Okonjo- Iweala said this during her visit to the Minister of Industry, Trade and Investment, Mr Adeniyi Adebayo at the Ministry and the Minister of Foreign Affairs, Geoffrey Onyeama in Abuja. She said that the volume is a small fraction of what Nigeria can achieve. The WTO boss said that Nigeria has more paths to thread in areas relating to trade, logistics, agriculture and finance. She added that the country must step up action on its economy, maintaining that trade can be instrumental if Nigeria can add more value to its products and improve its infrastructure to deliver trade.

The Director General, however said in world trade, Nigeria is active in areas of agriculture and joint Statement initiatives. “Trade negotiations on agricultural issues are very important to us and we are very active there. Nigeria is a leader on issues of e-commerce, services domestic regulations, investment facilitation, micro small and medium enterprises and women in trade”, She noted. Dr Okonjo-Iweala, said that the WTO will work with Nigeria to help deliver support directly with its resources in technical assistance, training and quality upgrade but also with other institutions in unlocking some of the bottlenecks that confronts the country.

“The WTO faces many challenges and also needs its own reforms to deliver results, the organization has not delivered a multilateral round of negotiations in quite a number of years and we have the unique opportunity of delivering the fishery subsidy negotiations. The dispute settlement system that is paralyzed we have to discuss with all members including the United States on how to make this work again, because the rules based organisation cannot continue to make rules if the dispute settlement system does not work”, she maintained. In his remarks, the Minister, Industry Trade and Investment, congratulated Dr Ngozi Okonjo-Iweala on her appointment as the Director General WTO, hinted the DG on some of the country’s expectations regarding engagements in ongoing negotiations and discussions.

According to him, “On the ongoing agriculture negotiation, Nigeria expects balance and equitable outcome that addresses structural causes of food and livelihood insecurity in Net Food Importing Developing Countries NFIDC and Least Developed Countries LDC. “On the Fishery Subsidy Negotiations we look forward to outcomes that result in reduction in over fishing and unsustainable fishing practices with effective differential treatment that allows a sustainable development of developing countries.”

Speaking in the same vein, The Minister of State for Industry Trade and Investment, Amb Maryam Katagum urged the DG WTO not to forget the commitment to sustain and enhance the ongoing dialogue and action on ‘women in trade’, as a firm believer in the power of trade to lift developing countries, including Nigeria out of poverty. The Minister of Foreign Affairs Geoffrey Onyeama in his office assured DG of WTO of the Federal Government support in dealing with trade Nationwide and the world at large.