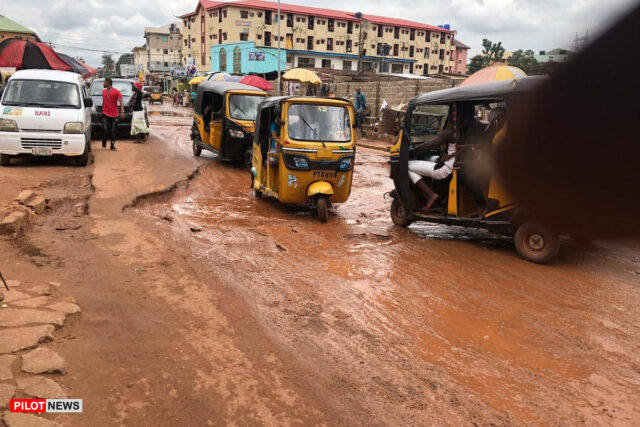 Residents of the Anambra State Capital, Awka, and its environs have lamented the effects of bad roads in the state, attributing low business transactions to the state of the roads.

The News Agency of Nigeria (NAN) correspondent who sampled the opinions of some residents on Monday in Awka, reports that some residents interviewed said that the bad roads had contributed to the high cost of transports fares in the city and its environs.

Mrs Ifeoma Enechkwa said that the rate at which the roads around the city get broken is a shock because the government keeps rehabilitating the roads, yet they appear not done.

“Virtually all roads that leads to schools, markets, hospitals, business out lets and residential areas are not passable and wondered the reasons behind such quick breakage.

“Christmas is almost near and work is yet to commence on these important roads that lead to commercial centres in the state, I hope the government will do something before festivity,” she said.

Mrs Uche Ekenechukwu, a fruit seller, said that the bad road leading to markets where she goes to buy her wares is horrible and has succeeded in making motorist hike their fares.

“We use to pay mini truck between N2,000 to N3,000 after buying our items but now one must have minimum of N5,000. This has affected the market too, because customers will always keep down prices.

“Business these days has been frustrated due to poor road networks from point of buying to point of sales.

“It really discourages me. I am even looking for a place to do nanny job now,” she said.

A motorist, Mr Nnamdi Okafor, who plies Eke Awka to Isuanaocha in Awka North Local Government Area of the state, expressed sadness at the inaccessible condition of Unizik junction road through Okpuno access road which is the only road open to the public.

Okafor said that the government should make them happier this festivity period by working on the roads for good business during this December period.

Mr Okwuchukwu Nwoye, a tricycle driver, told NAN that the level of bad roads he plies on a daily basis has a lot of ‘wear and tear’ on his tricycle and this takes him to the mechanic workshop most of the business times.

Nwoye said that the roads in their area of Isuaniocha, near Awka, is bad and impassable which made the operators of tricycles and bikes to raise their fare from N150 to N300 or N400, depending on the distance to cover.

“Most times, passengers choose to trek if they move in group instead of patronising us,” he said

He said that it is not their intention to raise fares but the rate of maintenance of their vehicles and other things to do before they can operate, add to the increase.

Mr Peter Okoye said that the residents and motorists in the state have been denied the pleasure of having a motorable road, most roads in the city have become inaccessible to both motorists and pedestrians due to their bad conditions.

Okoye said that Awka as a Capital City, currently has no road infrastructure and disclosed that he visits mechanic workshops on weekly basis to repair his vehicle due to the bad roads.

He advised the Government to have a culture of road maintenance instead of waiting till the existing roads fail totally as the cost of maintaining roads is cheaper than constructing new ones.

Mr Moses Okechukwu, an engineer, said that the the Capital City of Anambra has become a laughing stock when it comes to road network as all roads in the area have failed.

“Look at Aroma junction, INEC junction, Kenneth Dike Library, amongst other places. They are all very bad, yet we say we are ‘the Light of the Nation’,” he said.

Okeke appealed to the state law makers to do oversight function on the state roads and hold the ministry accountable and call for immediate massive road rehabilitation.

He said that the bad conditions of roads in the state is affecting all sectors of the state economy and the time for the government to really give the people what it has promised them.

Mr Ugochukwu Ogwu, a university lecturer, said that due to the bad roads, he spends hours on the road before getting to his office because of the traffic jam experienced on daily basis.

He said that the inability of the state government in putting the road infrastructure across Awka in good condition is worrisome and appealed that rehabilitation of the roads should commence before Christmas as government had promised.

Ogwu said that the rate of bad road has made it possible and easy for the public to be attacked on their way to their business areas and the festive period is fast coming, nothing visible is seen being done on the roads.

He said the time is now for government to embark on holistic road maintenance, reconstruction and construction across Awka befitting of its status as the Capital City of Anambra.

Ogwu said that road is one of the basic amenities expected from any Government. Good roads ease transportation of humans, goods and services.

Mr Marcel Ifejiofor, the Anambra Commissioner for works, when contacted on telephone, declined to comment on the state of the roads as complained by residents.

“I do not want to talk to you on the phone regarding the matter,” he said.

NAN reports that when the reporter asked for an appointment, he responded, “I am always on the site. (NAN)