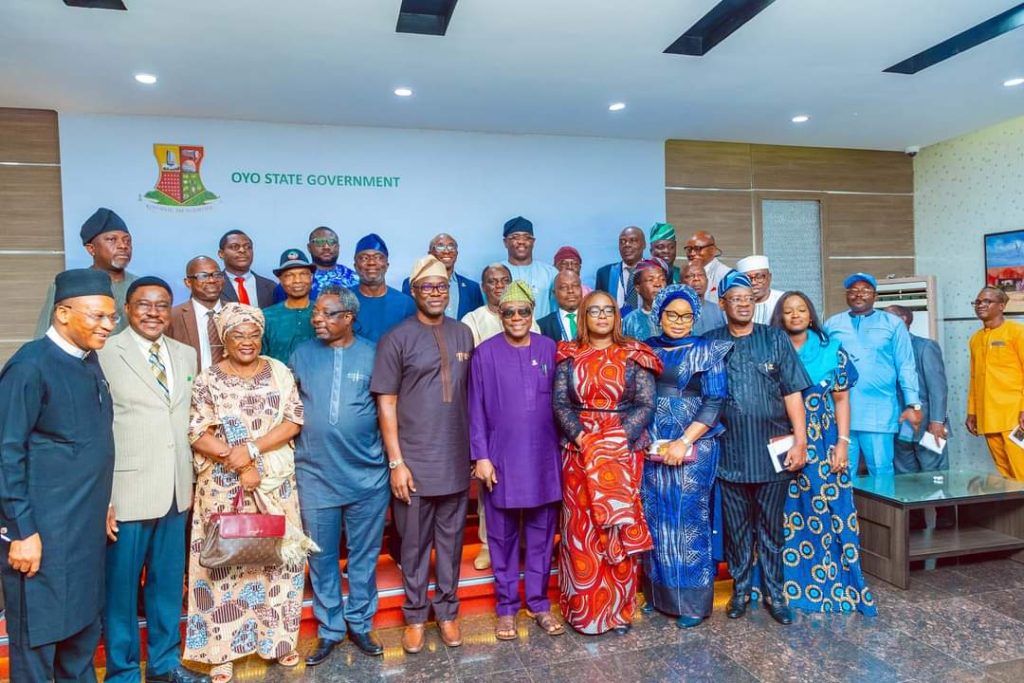 He tasked the committee to make the university the number one education degree awarding institution in Nigeria.

Makinde, who stated this while inaugurating the committee members at the Executive Chamber of the Governor’s Office, Secretariat, Agodi, Ibadan, said that his administration will leave a legacy of quality education in Oyo State.

While charging members of the committee to work out the policy and process by which the institution will be run, the governor said that the new university of education will soon become a topmost institution in Nigeria for the acquisition of degrees in the field of education.

The Governor charged the members of the committee to bring their experience to bear in the discharge of the duty given to them.

The implementation committee is headed by Prof. A.O. Omole of the Universityof Ibadan.

The Governor said: “The inauguration is a big step for us towards realising our goal to make EACOED the number one designation to obtain a degree in education in Nigeria. As politicians, I am always worried about how we will be remembered when we leave office. “But the real legacy that we can leave behind is something that we can leave in the people, something that will better their lives. And by this definition, education is the best legacy that we can bequeath to the future generation.

“What we are about to do is to put into proper perspectives the work of the committee that we are inaugurating today. “So, the task ahead of you is to create the policies and processes by which this institution will be run, because it won’t be an easy task.

“This is a greenfield project and I know that your task is not an easy one. You are pioneers and this is not because you are doing something no one has ever done but you will be the first to chart this course for Emmanuel Alayande University of Education.

“So, you are breaking new grounds and showing us the best way things can be done so that everything works out as intended and even surpasses expectations.

“For me, we are sure that you are up to the task, looking at the calibre of people in this committee and the decades of experience that you have, working in the area of education. “We are assured that you will bring this expertise to bear as you fulfill this new role.

“I am sure that every member of this committee will also want to leave a legacy. Of course, we know that it is not the aesthetics of the building that matters. Yes, that is important but what is of greater importance is what the students will take with them when they leave the school. “So, it is our firm belief that this committee will develop a pathway that will lead to the best outcome for this institution.

“The thought you should have in mind is that we are looking to create a shop for human resources to come and find the best talents that will run our schools, bearing in mind that teachers know the thoughts of their students. It means that what we are inaugurating here today has the potential to shape the thoughts of many generations to come.

“Let me use this opportunity to address the criticisms some have raised regarding this institution. Some have asked why Oyo State needs another university because we already have LAUTECH. So, the concern is centred around how the university will be funded. “Well, we had similar concerns when we started the process of getting the sole ownership of LAUTECH.

“When we came in as an administration, for LAUTECH, the system we met on ground was Oyo State paying the subvention from January to June while Osun State paid from July to December. When I came in, I paid the one for May and June and was expecting that Osun will take over, but we were having stories.

“So, Professor Omole and I started discussing and concluded that we would go after the sole ownership anyway. We might have well just start paying.

“And then, when I went to NUC to ask for the sole ownership about four months later, that was one of the strongest points for us to say, look, they cannot say we won’t pay because we have been paying for this and that.

“So, we have demonstrated that capacity and my answer is that those critics, who are not even our regular supporters, should vote for Omituntun 2.0, and then, we will show how we can repeat the same feat.”

In his remarks, the chairman of the implementation committee, Professor Omole appreciated the governor for the opportunity given to him and other members to serve the state in the new capacity.

He maintained that the assignment before the committee is not new but that it is a big task that must be accomplished.

“On behalf of my team, I want to appreciate the governor again for giving us this opportunity to serve the good people of Oyo State and Nigeria as a whole.”