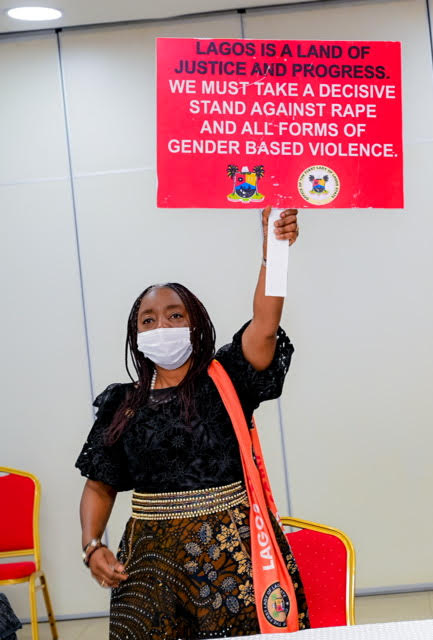 Wife of Lagos State Governor, Dr. Ibijoke Sanwo-Olu has rallied all stakeholders to support the fight against Sexual and Gender-Based Violence (SGBV), saying that the necessary will must be mustered to completely stamp out the menace of rape, especially against women and girls.

She spoke at the second phase of the Stakeholders’ Consultative Forum organized by her office for Non-Governmental Organizations (NGOs) and Civil Society groups involved in tackling SGBV crimes in the state.

According to a statement by the Assistant Director, Public Affairs, Office of the First Lady, Mrs. Olubukonla Nwonah, the forum was with the principal aim of galvanizing action among relevant stakeholders in line with the policy thrust of the state government on zero tolerance for all forms of extreme violence against women, girls, children, and also men and boys.

Speaking, the First Lady said: “To God be the glory that we are able to host the second phase of this stakeholders’ forum designed to scale up the fight against SGBV. Since the first forum in June last year, we have had a series of meetings to identify and work on the missing links between the different MDAs and organizations.

“The meetings were important and revealing. A lot came out of it and MDAs were able to harness their forces to work together. This forum is the second phase for us to meet the various NGOs and Civil Society groups that are closer to the people to understand their roles, challenges, and how to support the fight against SGBV.

“My motto in my secondary school is ‘action not words.’ A lot of talks, a lot of policies have been put in place. For me, it’s time to act more, be faster and be more proactive and that is what we are trying to do.”

Explaining that the Office of the First Lady is noted for social advocacy, she said it was always painful to hear of sexual abuse cases, just as she reiterated the need for all stakeholders to support the fight against the menace.

“A lot of progress has been achieved but there is still a lot to do. It pains my heart and my heart bleeds when I hear that there has been a rape case in any area; in any local government; in any school; in any organization and so on. It is really painful to know that these things are still happening and this reinforces the conviction that we must work collaboratively to stamp it out totally.

“We stand on zero-tolerance against SGBV. It is a lot of work but I know with the support of NGOs and Civil Society groups, we can achieve it. Government cannot do it alone and that is why NGOs are very important. So, my charge to you wonderful people is to go out there and intensify your work in our various communities against SGBV,” the First Lady said.

She also commended the state Governor, Mr. Babajide Sanwo-Olu on the recent signing of the Bill establishing the Lagos State Domestic and Sexual Violence Agency into law, and the appointment of an Executive Secretary in the person of Mrs. Titilola Vivour-Adeniyi, to lead the new agency.

“It is inspiring that the law, which also establishes the Sex Offenders Register, has finally become operational in the state and it is hoped that this will provide a quantum leap in terms of the legal framework to significantly and frontally tackle the menace of domestic and sexual violence, name and shame perpetrators and most importantly provide adequate medical and legal support to the victims,” she said.

At the meeting, members of the groups identified the challenges militating against the fight against SGBV crimes and proffered solutions. They also all signed pledges to signify their commitment to scale up advocacy and war against the menace.