Communique Of The Igbo Civil Society Coalition (ICSCO) After A National Meeting Held in Enugu, October 20, 2018. 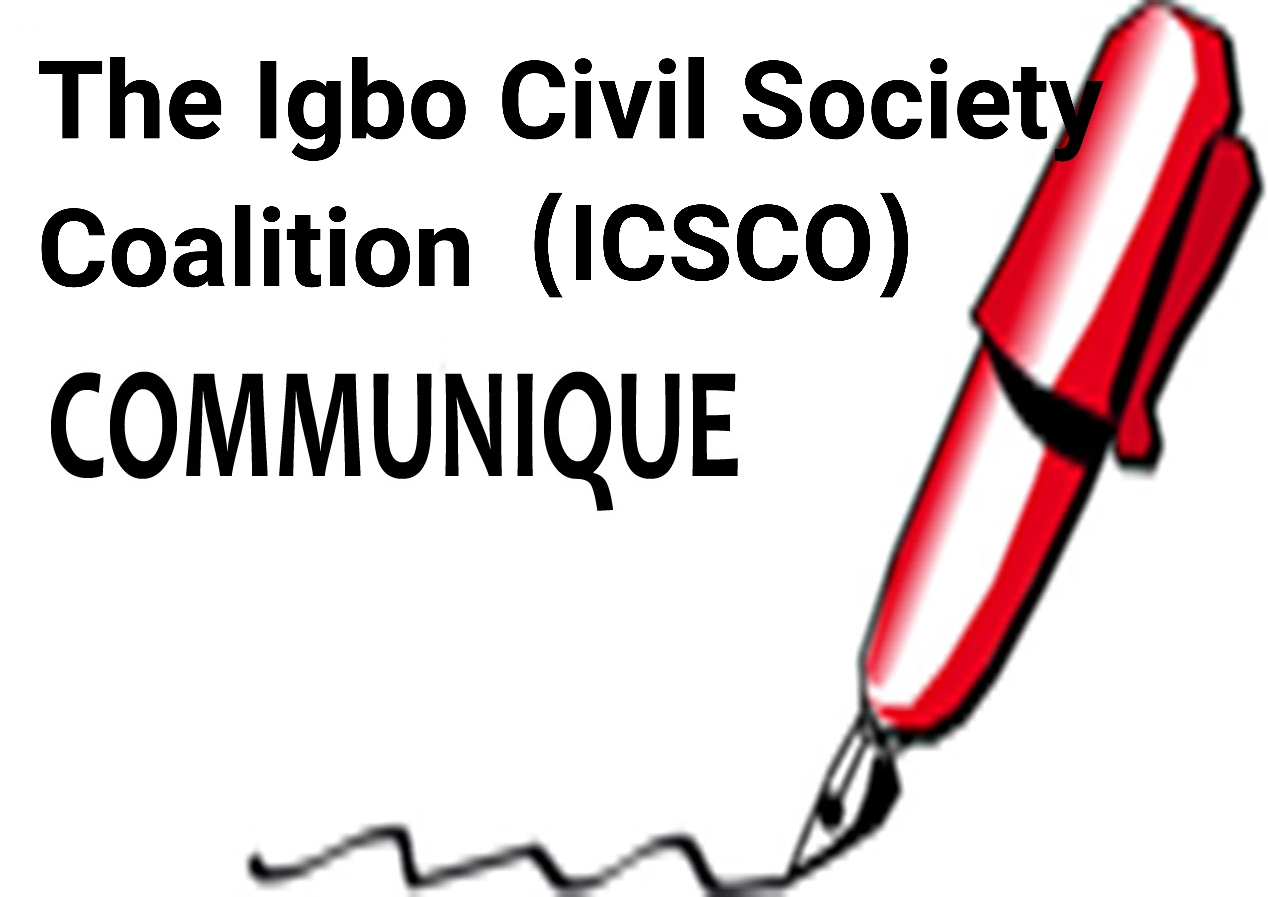 The Igbo Civil Society Coalition (ICSCO), the umbrella organisation of the Igbo civil Society peopled by civil society organisations and activists, professionals and professional groups, artisans, workers, academics, students, women organisations and other mass associations in Igbo land comprising the seven states of Abia, Anambra, Delta (Anioma), Ebonyi, Enugu, Imo, Rivers, and other parts of Nigeria, met in Enugu, the Capital of Enugu state on Saturday, October 20, 2018. The meeting which was fully attended by the aforementioned, exhaustively, discussed vast range of local and national issues especially as they affect Ndiigbo across the country, thereafter issued the following Communique.

The Deplorable state of infrastructure in Igbo land.

ICSCO examined the deplorable state of federal roads linking up the Igbo states as well as some local roads in some parts of the Igbo nation and unanimously described the situation as “deplorable and worrisome.” We make bold to say that while the federal government claims that it has done several thousands of kilometres of federal roads in Nigeria, those in Igbo land are, at the best, “death traps” which have caused us losses in both human and material resources. The same is true of power supply, airports and seaports in the region among other key social amenities.

In view of the foregoing, ICSCO calls on the Federal government to, as a matter of urgency, begin to put these facilities in order before Christmas and New Year celebrations when our kinsmen and women would travel from all the parts of the world to reunite with their kith and kin.

The ICSCO also reviewed the continued unlawful proscription of the Indigenous Peoples of Biafra (IPOB) globally recognized as a non-violent ad peaceful self-determination group by the government of Nigeria, while permitting the killer Fulani herdsmen rated as the 4th most dangerous terrorist organization in the world, to operate without hindrance not minding that well over 300 communities have been sacked in the Middle Belt by this ravaging group, human lives and wealth wasted by the group notwithstanding. ICSCO took serious note of a Nigerian high court which recently quashed a suit seeking the authority of the court to criminalise the Fulani herdsmen as a terror organisation. We have not found any rational justification in the circumstance that made the said high court not to criminalise the Fulani herdsmen that have committed more heinous crimes, genocide and pogrom against the Nigerian peoples than even during a formal war except to prove to Ndiigbo that there two societies in Nigeria: one which is the imperial and the others vassals.

ICSCO, therefore, demands the immediate and unconditional de-proscription of IPOB. We also demand that no non-violent pro-Igbo or Biafra groups should be sanctioned in future. Finally, we demand that the federal government should outlaw the MACBANS and the Kaupal AUPAL HORE that have been assuming responsibility for the mayhem in the Middle Belt and other parts of Nigeria.

Politics in Nigeria & The 2019 General Elections.

The ICSCO fully reviewed the political situation in Nigeria, especially with respect to the build-up to the 2019 general elections. While we condemn, in strong terms, the gross abuse of the rights of many political aspirants in the primaries that produced the parties’ candidates more-so as they relate to the prices of Nomination forms etc and the flagrant abuse of the party constitutions that prescribe how primaries should be conducted, we wish to state as follows:-

That the ICSCO will support any political party or Presidential candidate that publishes a Manifesto committing himself or herself to true restructuring of Nigeria that would give the Igbo Nation a contiguous administrative Region as originally proposed by Igbo leaders in 1994.

That ICSCO insists that only this will enable the Igbo Nation continue as a coastal state and in their centuries old maritime tradition that benefitted not only the Eastern Region but will help to develop the Middle Belt, North Eastern regions and beyond.

That ICSCO will not support any design intended to divide the Igbo into three weakened pieces of Anioma, Mbammiri and the Central Igbo. In view of the above, we appeal to all the political parties and Presidential candidates to start seeing the Igbo Nation and people as good partners in progress instead of pawns of exploitation and marginalisation. We do not support the devolution of powers to the states and local governments, while keeping those unjust and contentious structures that humiliate and marginalize our people intact, and;

That the Igbo Civil Society Coalition is in full support of any restructuring that will bring justice, peace and progress to all Nigerian groups and individuals. Such restructuring, we insist, must embody four fundamental elements namely:-

New Units of political administration as outlined for the Igbo Nation above which should be replicated for other Nationalities.

The control of her resources by every political Unit.

The re-organisation of the Armed forces and Security Services, not merely the so called state police, to reflect the new structures, and;

The Igbo Civil Society Coalition is eternally committed to mobilise Ndiigbo as well as other like-minded peoples of Nigeria in support of any political party or candidate that shares in this vision of a just and democratic society.