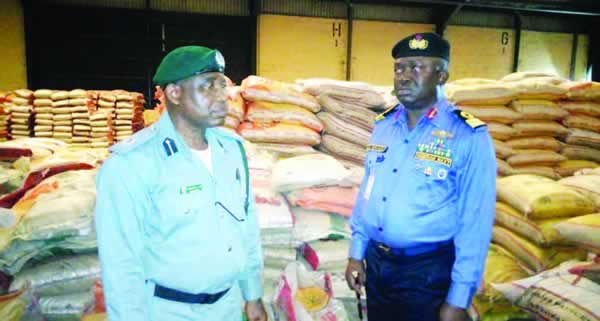 The Nigerian Navy NNS Victory in joint operations with the Nigeria Customs Service (NCS) have seized 3,039 bags of rice in Calabar.

The rice consignment was being smuggled into the country from Cameroon.

This was disclosed by the NNS Victory Commander, Commodore Julius Nwagu who said the rice trucks were intercepted in Bakassi Local Government, Cross River State.

The Navy had also paraded a suspect, Lawrence Onaka at the Custom’s Government Warehouse in Calabar.

The seized trucks and the suspect were handed over the Customs Service.

Onaka said the Navy was determined to ensure zero tolerance as far as trade crime is concerned on the nation’s maritime domain.

He told newsmen, “This is the first time the Nigerian Navy has extended its tentacles to the Bakassi waters and we are going to sustain it. I want to use this opportunity to advise our traders that sooner rather than later, we are going to move into the markets shop by shop to get every foreign rice out of our shops because they are banned”.

An Assistant Controller of Customs in charge of the Eastern Marine Command base in Calabar, Mr Joshua Omachi, while commending the Navy assured that the Command will continue to partner with sister agencies to check smuggling.

Omachi said the suspect will be charged to court once the investigation is completed.